(But at the hands of Ravan
You will not suffer insult Sita
Ravan will remain Ravan
He will not be Ram, Sita.)

A packed Kamani Auditorium in New Delhi thundered with applause as Ravan addressed Sita, the wife of Ram. The moral opulence of the demon-king and the ethical poverty of the god-king lay bared to the audience. The occasion was the opening performance of Raavan ki Ramayan – a play written and directed by Atul Satya Koushik.

In this adaptation of the great epic, Ravan captures Sita but never touches her. He holds her captive to avenge the mutilation of his sister, Surpanakha. Lakshman, the brother of Ram, cuts off her ears, nose, and breasts when Surpanakha expresses her desire for Ram. Surpanakha insists that her freedom to solicit pleasure from a man has riled Sita. She has had little liberty in her choice of partner and so has instigated Lakshman. Whatever the reason, Ravan concludes that such violent reaction is uncalled for and swears revenge.

The play reimagines the logic of conflict in the myth. The defacement of Surpanakha is the original sin. The kidnapping of Sita is a reaction. Brash princes from Ayodhya, Ram and Lakshman, are the agents provocateur. Their recklessness leads to war in Lanka – a prosperous kingdom of the demons ruled by the erudite disciple of Shiv, Ravan.

Written in verse form, the play begins with entreaties of support from Ravan to Shiv. Ravan reminds Shiv of the injustice endured by the demons due to trickeries of the gods since the days of Samudra Manthan (The Churning of the Ocean). But in a style typical of mythic creators, Shiv remains non-committal. His spurning of Ravan is rich in philosophy:

Upon return from the meeting, Ravan learns about the plight of his sister. Ramayan begins. But this time with adequate opportunity for the alleged villain to plead his case.

Through twelve scenes, Raavan ki Ramayan forces the audience to re-evaluate the dominant discourse of the epic. As the gentleman next to this viewer quipped, “Hum jisko jalate hai har saal, kya woh jalane layak hai bhi ya nahin?” (The demon whose killing we celebrate every year, should his destruction be a cause for celebration at all?”) There was no dearth in claps and cheers throughout the play as characters served powerful dialogues. The aisles remained still through the two-and-a half-hour play, which ran late into the evening. 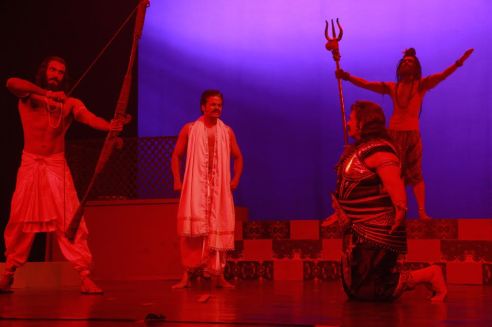 No doubt that at the heart of the performance is a brilliant script. No-easy-answers with smatterings of humour account for its success. A rhyming script can be unfair to actors because it limits innovation – not only with dialogue but also with body movements. Nonetheless, Nishtha Paliwal as Mandodari, the wife of Ravan, was easily the best when it came to acting. Sachin Joshi as Sumali, maternal grandfather of Ravan, demonstrated excellent sense of time with comic chidings. Shiv and Ram impressed with their chiselled bodies. Narration by Raza Murad left no doubt about who commands the baritone besides Amitabh Bachchan and the late Amrish Puri.

Ravan was played by Puneet Issar. His huge frame and the g-r-r-r in his voice make him fit the role with ease. The actor who famously played prince Duryodhan in his twenties now plays king Ravan in his fifties. And he does well to depict not only devotion, arrogance, enmity, and grief but also the subtler shades of longing and hesitation. However, a beefy Issar wobbles on stage while kneeling to Shiva and jumping during action sequences. The script needs adjustment to camouflage the weakness.

If a negative has to be pointed out in the performance then it has to be the set design. Two bare platforms on either side of the wings occupy too much of the stage. They even restrict the movements of Shiv during his dance at the opening of the play. Images of two lions used to depict the court of Lanka look more like printings – definite anachronism that mythological performances should watch out for. The background score has latitude for improvement as well.

The Politics at Play

The political signification of the play must not go unnoticed. It comes to the fore with a telling dialogue from Ravan for Ram:

(In matters of wisdom
I score more than you
Look at the difference in our castes
You are a Thakur and I the Pandit.)

The play underlines the Brahmin identity of Ravan on more than one occasion. The demon-king was indeed born of the union of a Brahmin father and a demon mother according to the dominant Ramayan. But what is significant is that Ravan chose his matrilineal lineage and decided to remain demon and rule Lanka. Moreover, the demons led by Ravan and the Brahmins were at loggerheads. The fight between them and the Brahmins once again date back to the days of Samudra Manthan, when the gods deceived the demons and denied them ambrosia. The Brahmins are human beneficiaries of cons that are conveniently blamed on the gods.

In many parts of India, particularly in the south, Ravan and other demons such as Mahisasura are worshipped. These cults look upon the demon kings as mythical representations of dalits. The demon kings fought the god-Brahmin combination to avenge the denial of ambrosia – the sign of material resources in the real world.

At the heart of this denial is a trickery which, when seen in this-worldly context, is nothing but the caste system. The attempt to Brahminise Ravan beyond his given patriliny counters the cult of ‘asura’ worship. The effort to elevate Ravan to the top of the caste system appears as a placatory tactic to co-opt, or at least blunt, powerful symbols of the dalits.

The telling and retelling of the Ramayan through centuries mean there are several accounts of the great epic. It is impossible to pinpoint any original source. But Hindutva hardliners have striven to institute a single version of the Ramayan. This version apologises for caste and gender inequalities but stops short of challenging them.

Hindutva hardliners, like sticklers of other religious groups, have managed to proscribe the circulation of knowledge that runs counter to their ideology. The removal of Three Hundred Ramayanas by AK Ramanujan from the Delhi University syllabus must be mentioned here. So, besides the performance, it is also to be judged whether Ravan ki Ramayan bolsters the larger politics of Hindutva.

BJP veteran L.K. Advani was the chief guest for the opening show.