By A. Latheef Abbas Patla

Onam is the most famous festival in the south Indian state of Kerala. While it celebrates a popular Hindu legend, Onam has never been known to be a ‘Hindu’ festival. Rather, it is celebrated with equal élan by one and all, and has, in fact, become a unitary constituent of Kerala’s wholesome multi- religious culture.

As per Hindu beliefs, Onam is consecrated to King Mahabali (also known as Maveli), who was benevolent, considerate and indulgent to his subjects. A popular Onam song re-lives the peace and prosperity that Mahabali assured his subjects:

“When Maveli ruled the land,
All people lived as one.”

Onam celebrations span ten days, with the first day being referred to as Atham and, the last and most important day, called Thiruvonam. Hindus mark these days with many rituals, rites, and ceremonies.

I can never alienate Onam and the fond memories of Onam celebrations from my memories of childhood in Kerala. Onam festivities filled my boyhood with profuse joy. Looking back I realize that it was the remarkable ambience and pluralistic spirit generated by Onam that awakened and nurtured my sense of religious sociality. Onam is celebrated in the month of Chingam (Taurus) or the month of harvest in the Malayalam calendar and coincides with Spring. In the windy dawn of Onam days, children set out from their homes in search of varied and colourful flowers, wandering across the muddy banks of rivers.

During Onam the front yards of houses, whether they be of Hindus, Muslims, or Christians, are adorned with the pookalam (flower carpet), which is an intricate design made on the ground and richly decorated with the flowers and leaves brought back by the children. People then wait for the arrival of Maveli. According to legend, Maveli allowed himself to be trampled to the ground by Vamanan, an incarnation of Lord Vishnu. In return, he was permitted to visit his subjects once every year. Onam marks Maveli’s resplendent return and thus Onam celebrations, whether it be in a school, office or a neighbourhood, begin with the grand entry of a person dressed up like Maveli, much to the delight of the young and old. The most outstanding part of Onam festivities is the feasting, the multi-course, vegetarian delight known as Onasadhya. Onam holidays, lasting from about a week to ten days, are sanctioned by the government to all state institutions.

With the alarming expansion of the fascist dogma of the right wing political party in India, the secular credentials and the plural ethos of a multi-religious and cultural region like Kerala is being threatened. The resurgence of pro-Hindu nationalist agenda, through the RSS and the Sangh Parivar, the affiliates of the ruling Bharatiya Janata Party, has become a big threat to Kerala’s socio-religious harmony, engendered by celebrations like Onam. Adherents of these outfits have been trying to paint Onam as though it is the exclusive preserve of the Hindus. That said, the religious radicals among Muslims have not been helping matters either. They, too, mostly belonging to the Salafi-Jama’at-e-Islami ideologies, aggressively champion religious exclusion declaring festivals like Onam un-Islamic and haram, views that have become subject to incisive criticism by the exponents of secularism. 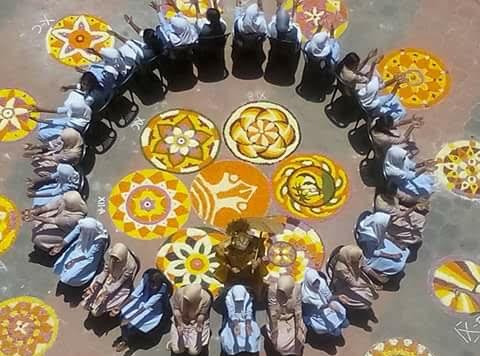 Fraternizing among Malayalees across religious and cultural differences has a vast acceptance and a long tradition in Kerala. X-mas, Eid-Bakrid, and Onam celebrations have brought people together from different sections of society since ages. So, in this Onam season, I make this plea to my Malayalee readers: Let us eschew divisive calls that harp on purity and exclusion, values that try to build borders and turn friends and neighbours into strangers.

Bio:
Latheef Abbas Patla is studying at Madeenathunoor College, Calicut. He is interested in Anthropology and the Social History.