The Indian part of the Sundarban Biosphere Reserve is spread over 48 uninhabited and 54 inhabited islands, among 19 Community Development Blocks in the North and South 24 Parganas districts of West Bengal. I was leading a team of investigators for extensive field survey in 57 villages in these 19 Blocks to study the socio-economic conditions of the Indian Sundarban region after Cyclone Aila as part of my research, interviews, and soil sample collection in the first month of 2018. Our team was dismayed at witnessing the everyday struggle of the local people of the Sundarbans. 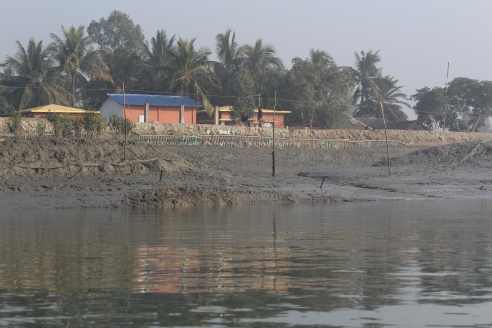 “After Cyclone Aila, the islands continue to get flooded every year during monsoon. People of Sundarbans live in fear of another Alia like cyclone that would wash away the entire Sundarbans in the same manner,” says a fisherman from the Mousani Island.

The islands situated over the 19 Blocks have faced different problems due to their location. The main economic livelihood and dependency of the Sundarbans people are on fishing, crab collection, honey harvesting, besides agriculture during the monsoon season.

Productivity of the agricultural land has reduced drastically in the past decade. Blocks like Sagar, Namkhana, Pathar Patima, and Kultali are badly affected due to salinization of agriculture land and coastal erosion. Gosaba, Hinjalganj, Hasnabad Blocks have suffered due to lack of adequate drinking water. 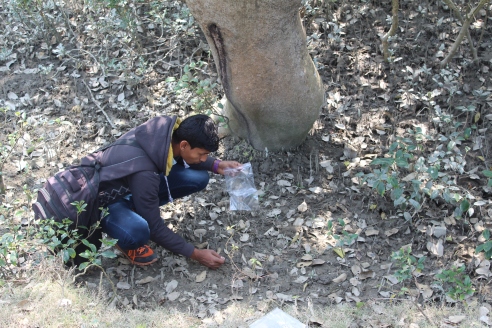 Collection of soil sample in Netadhopani Camp in core forest

The control and management of river flows via embankments, dams, and barrages for controlling and diverting the flow of water in upstream areas for flood control. Various other human needs have caused reduction at a large scale in the inflow of freshwater into the Sundarbans and have seriously affected the base of biodiversity in the area.

This has resulted in an increment in the salinity content and extensive sedimentation. Threats to such ecosystems arise from changes in global climate, especially any rise in the sea level. The future of the Sundarban Biosphere Reserve depends upon proper planning and management of freshwater resources as much as on the conservation of its biological resources.

Some efforts have been made by the government, Panchayat, and local people to control the soil salinity but the problem remains. The European Commission Humanitarian Aid (ECHO) had funded soil tests after Aila and they found that the soil salinity reached up to five feet in depth in most of the Sundarban areas after the cyclone.

The economy and social condition of the villagers are truly dependent on the fragile ecosystem of the Sundarbans. So eco-friendly sustainable development planning is needed in this region.

Badly planned and poorly executed policies related to fishing and honey-harvesting have also affected the livelihood of the local people. Economic desperation has resulted in large scale out-migration, particularly in last one decade.

We visited 30 households in Anpur village of Gosaba block, and learnt that most of the youths had migrated to Tamil Nadu, Kerala, Bengaluru, and even to the Andaman Islands, to work as construction labourers.

During our field survey, we found that even the flagship MGNREGA has failed to provide adequate work in the region, leading to dissatisfaction among people regarding the project.

Household survey and interaction with villagers

Although there is no concrete data, anecdotes from several villages suggest that trafficking of young girls from the region to cities like Bangalore, Pune, Mumbai, Patna, Kolkata, etc. have become rampant due to extreme poverty, particularly after the cyclone.

Chandan Das from Gosaba Block claims that from his Block alone there have been reported cases of at least 25 girls being trafficked since 2009 cyclone.

Before coming to power, the present Chief Minister of West Bengal, Mamata Banerjee had visited various places in the Sundarbans, and promised to the local people to rebuild concrete embankments along the islands occupied by human habitations. However, most of the breached and broken embankments remain in same dilapidated conditions even though she is now in her second term.

Field investigators visited one such under-constructed embankment on the banks of the Kalindi River along the India-Bangladesh border near Samsernagar village in Hingalganj Block. Villagers claimed that the government snatched away their land but have still not provided them with appropriate compensation in return.

In another instance, the government acquired more than 300 bigha land of 56 families from Baikanthapur village of Kultali block for the construction of a concrete bank years ago, but they have not received the compensation till date.

Netai Moldal from Baikantapur says, “I had only three Bighas land on which I grew crops to support my family financially. The government acquired my land but gave me no monetary compensation or another piece of land as substitute.”

He added, “It has since become very difficult for me to sustain my family at a fragile coastal island.”

We visited Baliara village of Namkhana Block where many people still live under temporary shelters of polythene where they had sought shelter after cyclone Aila had washed away their homes.

The sea is just 100 metres away from their temporary shelters and they live every day in the fear of their shanties being washed away. Mukhtar Ali from Baliara village is not even sure if the hut they live in can survive till next monsoon.

The Sundarbans region was anyways underdeveloped, and cyclone Aila – clubbed with the government’s apathy – has only made the situation worse.

Bio:
Mehebub Sahana is a PhD research scholar in the Department of Geography, Jamia Millia Islamia University, New Delhi, India. His research is on “Ecological and socio-economic vulnerability assessment to climate change: A study of Sundarban Biosphere Reserve, India.” He has published over 10 scientific papers in reputed international peer reviewed journals on different emerging issue on climate change and socio-economic vulnerability. E-Mail: mehebubsahana@gmail.com