There were days which waved me as a winner. Also nights, which proved me a sole loser. Regardless of what the outcomes were, I had to keep my pace and emotions optimal. But when I looked back, I inferred that I had been affected by negativity mostly. Rather be it in high school or at several times during graduation, the poisonous vibes used to capture my actions, my emotions and my soul. My daily chores were affected and underperformance spiked to new heights. Hitting the rock-bottom, I was quite helpless, losing my self-confidence and the urge to dwell better and bigger. My aims were shattered, and I suffocated.

I read a few books, listened to some of those eminent voices, whom most of us were proud of. But I found that it had to be just me, who would rediscover myself from those dungeons of depravity. I walked through those deserted streets at dawn, listening to what was being conveyed by nature herself. I could see myself broken down, in those shattered pieces of wine bottle. It was high time I needed to assimilate them all, and portray myself entirely. I had to restructure myself, shake off those dust particles which made my linen look weary. I had to prohibit any more nuisance. With immediate effect, I stopped perceiving them simply. It felt like, the more I thought of it and felt it (when I saw or heard), I lost my way in the maze and got strangled altogether. The reverse helped me settle matters a lot.

We know that money grows when kept secure. The peace of mind follows the same path, too. Staying calm was such a power which never betrayed me. So, I invested more time in myself. I kept grinding – trying to be more composed and complacent every day, rather, every hour. I realized that the lesser I consumed external opinions, the deeper I could dive in myself. I stopped paying heed to unwanted suggestions, which seemed quite irrelevant or which could harm my inner harmony. I acted as if I didn’t notice anything. Not only did it sway me away from further chaos, but also re-ignited my confidence. I kept things to myself and managed to get to the crux of it.

Still, somewhere, it meant to be temporary. I felt incomplete.

I jotted down the difficulties I faced. The entire transition was quite difficult to adapt to. It was one of the toughest phases I had to bear with. Even when others had so many voices to listen to, I listened to my own beat. This inadvertently made me quite fearless and I started to live on my own terms! I indulged myself in some fresh set of hobbies, which helped me remain creative and agile. Although I was impulsive, I started to take decisions at my own risk. Sometimes I was reprimanded harshly, but I moved on believing it to be a part of the game. With my vision clear and straight, I shuffled different strategies on how to improve. Some proved to be quite effective, the rest became learning.

I incorporated activities in my daily life, which I loved. Art helped me regain my lost strength and stability. I used to express whatever I felt – not to anyone, but to my diary. Whenever some new ideas struck me regarding my studies or work, I would keep them safe in my diary. I used to love writing blogs and articles on various aspects. Most of the early mornings got devoted to workouts. Initially, it was quite tough to break the age-old routine. But, unless you change, you don’t get results. Exercises helped me realise my potential – both physically and psychologically. My day kicked off pretty well. Even checking out new recipes from the Internet and making them at my own will, gave me new wings of freedom. I appreciated my efforts – whether be it a blog post or chicken achaari, for dinner. Several new opportunities made me realize that I could do so much!

Not only Fridays but now I had become my best friend on every single day. It wasn’t that I had lost all my friends, but I had prioritised myself over all the buzz and fuss. The ones which I had earlier poured in much attention, just got brushed aside now. Friends were relieved to see me flying once again. Besides more family time, several opportunities popped up which boosted my courage and self-confidence. Gradually, I had set newer boundaries – not to follow someone else’s footsteps, but to compete with my own self. Every day seemed to be a new challenge for me, and I was pumped up. Working on various projects of life resulted in various flavours. Eventually, my desire to scale summits ended up on a splendid note – conquering Chandrashila peak (around 12,100 ft) this spring. Oh yes, trekking was damn fun! 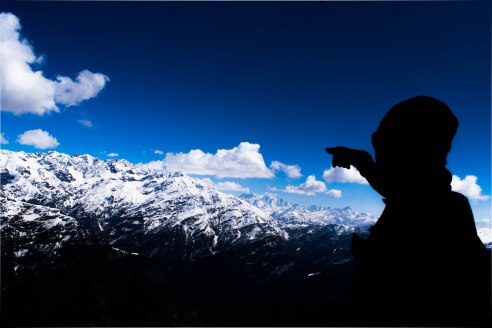 The same person, who used to get hurt and affected from pessimism, today, cleared away all the gloominess.

It was a big win – not over anyone else, but ME!

Bio:
An engineer by profession, a blogger by passion, Ankan Hore often likes to recreate simple things simpler and infuse something unique and interesting in them. He has a keen interest in writing short stories, narrating personal experiences and other incidents from past life as well as write poems on specific themes. He maintains his personal blog here. Besides blogging, he devotes time to cooking, playing table tennis, and travelling to places in his bucket list.

One Response to “How I conquered myself”