“The angles of vision—they are all abstract!”

In an essay I had contributed a year before last on Sam Peckinpah, I had tried to examine what it is exactly that the implications of Eisenstein’s and Pudovkin’s montage theory are. I arrived at this conclusion, basic as it is. That if you have a man glowering at the ground and you cut to a dog drinking water (which is what he’s looking at) it means that he is probably thirsty, whereas if you cut instead to a dead body that changes the entire meaning and also alters the expression on his face.’

Scorsese has said before that the conjoining of two frames together into a continuous flow of motion sometimes yields a third additional shot in the mind’s eye that he has referred to as a ‘phantom image’. John Huston said it best when he described why it is that the cinema is the medium that perhaps best represents the human thought process. “The succession of pictures in a well-made film flows almost as one’s own thoughts flow. It is almost as though the camera were behind the eye and projected onto the screen what one wished to see. When you turn your head aside to look at something that’s a ‘pan’, when you blink that’s a ‘cut’, and when you close in to listen to something that has your immediate attention that’s a ‘zoom’.”

With this in mind, it is interesting to approach Eisenstein’s more baroque later period, where he really began to embrace the ‘grotesque’, the ‘ornate’ and the gloating close ups that later characterized the work of Sergio Leone. Some of his films are like Josef Von Sternberg (at his most decadent) cross-fertilized with the geometry of Fritz Lang. Eisenstein had a great feel for faces—an almost intuitive sense of what the human facial apparatus can communicate. He had also perhaps, as potent a relationship with the Mexican proletariat as Leone. Just the looming close ups of eyes staring on in entranced vengeance, the full-mouthed silent fury of the oppressed, and the marble gaiety suddenly consigned to the gallows with a swift brush stroke.

Eisenstein’s lost film ‘Que Viva Mexico’ leaps from the abstract to the lyrical and eventually to the downright dramatic. There are passages of pastoral beauty and evocations of rural life that blossom into the heart like sunflowers budding from a parched soul: A village maiden washing her hair by the river while her eyes linger in the air in earnest speculation of romance, a bony bemused village boy swings from an inverted triangle of a hammock which is soon superimposed over the pendulous necklace that is the object of her aspirations; two lovers entwined on a hammock in an affectionate embrace under the watchful rejoice of two mating macaws. Birds peck at each other, flowers sing, the Venetian blind rays trickle through swaying palm branches illuminating the floral sprawl and the wild jungle winds waft wordlessly over the adobe caked hutments and market cries that grant an almost warli-esque serenity to the folk imagery. Like something of Diego Rivera (himself one of Eisenstein’s main guides on the landscape)! We are given a glimpse of how a matriarchy functions, with haggard village elders presiding over the laborious preparation of a feast, inspecting the dowry (in one hilarious image, a toothless old lady tries biting at a gold coin so as to determine its authenticity), feeding some of the scrawnier boys their snacks and supper, and effortlessly assuming—with almost the flick of a finger—the mantle of the authority figure that no man ever dare trifle with. 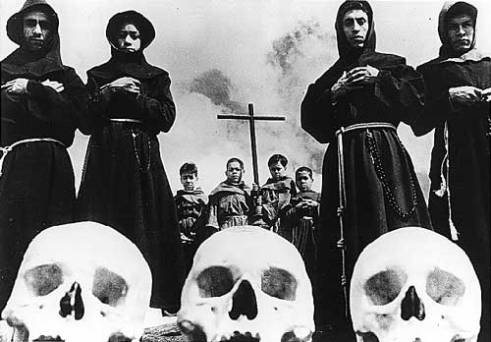 By the late 1920s/early 1930s, when the film was being shot, Mexico itself had gone through a rich period of Surrealism in the fine arts, chiefly painting and sculpture. It proved also to be a refuge or sanctum for the likes of Leonora Carrington and other wild childs of the west. Her lover Max Ernst had rendered its vegetation in almost psychedelic formation. There was the puzzling ornamentation of Frida Kahlo, the biblical visions of David Alfaro Siqueiros, the macabre satire of Jose Guadulupe Posada, the Marxist polemic of Jose Clemente Orozco;the leftist jungle literature of the mysterious B.Traven (incidentally Eisenstein took off for Mexico at the urging of renowned leftist author Upton Sinclair). Andre Breton (the godfather of the surrealist movement) and Luis Bunuel (who worked extensively in the Mexican film industry) spent a good deal of time there establishing a coterie of almost formalistic surrealists. Skulls, animal aberrations, monstrous figments partly of mythology and partly of an un-intoxicated imagination (it is my sincere belief, although I may be drastically wrong, that this movement was not drug-induced, Shamanistic ceremonies notwithstanding): The Day and Dance of Death whose all-encompassing human skull proved to be their most potent totem figurehead and Deity. “The Mexican mocks death!” Our gravel toned narrator informs us. Protuberant-cheeked children bite humorlessly at skulls carved out of sugar. The film itself opens with a succession of images of Reptilian gargoyles adorning precipitous Aztec Pyramids accompanied by the electronic drone of an eerie buzz on the soundtrack (an indistinct sound worthy of Ligeti) that grows shrill in frequency once the subject of death is broached. The cavernous lighting fills up the craggy rock-torn features of the Aztec emblems: At times an overhead beam that violently emphasizes the eyes (or lack thereof), or then angular rays projected garishly from down below that shadow the empty craters and hollow cheekbones, giving the deities almost a semblance of the ‘demonic’.

At the funeral site, the camera frame starts to slant periodically as it captures faces like those hewn from stone, eyes either shut in a mournful trance, or else gazing on into the endless infinite. “Stone!” our narrator boastfully proclaims. “Older than Adam.” The film ends with a graphic image of our proletarian hero being sentenced to doom by the spiritual descendants of the Spanish Conquistadors: The debauched American. The young man and his cohorts are buried in the ground upto their necks, their disembodied shoulders and heads tilting up from the earth for horse hooves to trample upon, their eyes zombified beyond repair into a sepulchral glare. The gun battle that precedes it is genuinely brutal; I am not quite sure the effect of gun squibs had been mastered as yet by special effects crews at this point so the rifle recoils are such that one could not possibly have faked it. Not only is Leone evoked, but also Peckinpah and Huston—old salt gringos that had a genuine affection for and an understanding of the Mexican landscape and also of traditional Mexican folk culture.

A lot of this must have resulted in the apocalyptic imagery of Alejandro Jodorowsky, or even his partners in crime from the Panique Theatre movement—Roland Topor and Fernando Arrabal.

The references are myriad and vivid as are the influences, but Que Viva Mexico is like nothing before or after it. A work of true revolutionary fervour! Films that leap to mind range from Fred Zinnemann’s 1936 Redes, about the Mexican fishing community, to Tabu 1931, F.W Murnau and Robert Flaherty’s poetic rendering of the South Seas, to Josef Von Sternberg’s final work The Saga of Anatahan, and also Carol Reed’s Outcast of the Islands. One can never be entirely sure of what the old master Eisenstein genuinely intended, as it ended up being an incomplete work, but there are traces of visionary mania that could not have possibly been the result of any kind of external hand (although there are rumours that resident New York madman Kenneth Anger had something to do with the editing, because the footage landed up at the Museum of the Moving Image—MOMA). Eisenstein’s second in command Grigoriy Aleksandro, definitely contributed to the restoration and he even delivers an affectionate prologue in which he enumerates some of the tussles Eisenstein had with some of the big Hollywood moguls through hilariously photographic means with Eisenstein actually standing beside some of the tycoons, and not looking too pleased about it. Be it the sinuous syntax of his earlier films, or the bombast of Prokofiev in Alexander Nevsky or even the lurking specter of Ivan the Terrible, Eisenstein was perhaps too gargantuan (in a gloriously grotesque kind of way) for Hollywood. I’d like to think that Aleksandro must have had a similar relationship with Eisenstein that Tarkovsky’s visionary first AD Konstantin Lopushansky must have had with him.

The Russians have always been better than any of their Western counterparts at visualizing our worst nightmares. Look at the trajectory of Russian science fiction alone, the dystopia of the Eastern Bloc (best exemplified by the literature of the Strugatsky brothers) is anything beyond our wildest social, political and even environmental comprehension. Thanks to the gulags and Chernobyl they have genuinely visited the Heart of Darkness, and not just in a theoretical way. It is safe to say that they know what hell is, because they’ve actually had to experience it from time to time. There’s no philosophizing about it, it is the jaundiced fruit of cold hard practical reality. The Industrial Wasteland that Russia has experienced goes way beyond T.S Eliot’s wildest nightmares! And we are perhaps all the better off for it; for if we cannot see purgatory visualized in any tangible form, it will persist to eat away at the corners of the imagination. Dante tried, but literature is different from the realm of the ‘visual’ and the ‘sensory’, and ceases often to fill in the blanks to the sphere of the unthinkable, leaving it instead to us. It’s sometimes reassuring then to know that we have in our historical midst certain visionary visual artists to thank for the purging of human imagination, so that we may be cleansed of our own monsters and nightmares and perhaps even… mock them like the Mexican, and make play of it. Viva Mexico indeed! No wonder they refer to it as the land of spiritual liberation.

Bio:
Vivaan Shah is an actor in theatre and films and author of the crime novel Living Hell.