Mohammed Moulessehoul, a novelist and an Algerian army officer, assumed the pen name of Yasmina Khadra, to avoid army censorship. In his novel, The Swallows of Kabul (2004), the protagonist Mohsen Ramat walks into a stadium for witnessing the public execution of a woman on the charges of adultery by the Taliban. The woman is placed in a hole; the Mullah recites from the Quran, chastises the woman and the spectators about the sin of lust; and makes a signal for the execution, which is described graphically:

‘The mullah raises an imperious hand to silence the shouter. After reciting from the Quran, he reads something that sounds like a judgment, returns the sheet of paper to an interior pocket of his vest, and at the end of a brief meditation proposes that his listeners arm themselves with stones. This is the signal. In an indescribable frenzy, the crowd rushes to the heaps of rocks placed in the square a few hours earlier for the very purpose. At once, a hail of projectiles falls upon the condemned woman, who, since she has been gagged, shivers under their impact without a cry.’

Mohsen, a university-educated sensitive man picks a few stones and throws at the hapless woman. He returns home anguished. As he tries to relieve the burden on his conscience by narrating this incident to his wife, Zunaira, who he had met at Kabul University, she is shocked and this incident sets off a marital discord, hastening the plot of the novel to its resolution.

Cut to 1914. The French intellectual and novelist, Albert Camus’ father witnesses a public execution in Algeria. A farmhand was decapitated for killing a family, including the children, brutally and robbing it. He comes back home feeling nauseated and sick: ‘What he saw that morning he never told anyone. My mother relates merely that he came rushing home, his face distorted, refused to talk, lay down for a moment on the bed, and suddenly began to vomit.’

Camus begins his essay on capital punishment, ‘Reflections on the Guillotine’ (1957) with the incident of his father 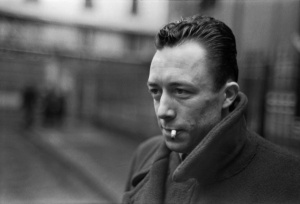 witnessing a public execution and its physical impact on him. He asks: If a respectable citizen of a country feels this way after witnessing a public execution, which is supposed to set a wrong right, then what’s the point in awarding capital punishment at all? And forthrightly concludes: ‘…it is obviously no less repulsive than the crime, and this new murder, far from making amends for the harm done to the social body, adds a new blot to the first one.’

Camus refutes one of the arguments in favor of awarding death penalty that by creating a public spectacle, it deters others committing similar crimes. Camus asks if the purpose of death penalty is to instill fear in the criminals or perpetrators of crime by making the execution public, that argument does not hold true anymore as executions are no more public. They are conducted surreptitiously at the odd hours within the confines of the prison.

The last public execution in France was that of Eugen Weidmann in 1939. The photographers were allowed to take pictures. When one French newspaper, Paris-Soir, did a page-long illustration of the event, the government didn’t appear amused. Public executions were banned, thereafter. Camus feels that one of the reasons for moving the executions to the privacy of prisons could be that if an execution is publicized with all its gory details, it might lead to public discontent and revolt, leading to the destabilization of the state.

Related to the first point, Camus also refutes the argument that death penalty works as a deterrent to criminals, who might commit similar crimes. (This argument is very similar to some of the arguments that have been put forward against awarding death penalty for the perpetrators of Delhi rape or to Yakub Menon in the Mumbai Blasts case.) Camus quotes Arthur Koestler (the Hungarian writer and communist, who was put on a death row for a while) to refute that death penalty works as a deterrent. In fact, the statistics ‘drawn up at the beginning of the 20th century in England show that out of 250 who were hanged, 170 had previously attended one or more executions. And in 1886, out of 167 condemned men who had gone through the Bristol prison, 164 had witnessed at least one execution… [It] give[s] cause to think that around my father, the day of that execution, there must have been a rather large number of future criminals, who did not vomit.’

For Camus, one reason why the law legitimizing death penalty does not work is because the law takes human nature to be static. The law assumes that human nature is stable and will recoil at the thought of death. He rightly argues that human consciousness and human passion are far too complex to be deterred by law. There is bound to be a conflict between human passion and law. Certain passions of love, hatred, jealousy, and revenge oscillate the human mind, whereas the law takes human nature to be stable. Some passions are so overpowering that it might overlook the consequences of an action: ‘For capital punishment to be really intimidating, human nature would have to be different; it would have to be as stable and serene as the law itself. But then human nature would be dead. It is not dead.’

Since it has not been conclusively proved that death penalty has decreased the number of crimes, Camus claims that through death penalty, the society accords a privileged position to itself. Thus, death penalty is nothing but ‘revenge’ as it doesn’t satisfy the stated goals of intimidating other criminals. It is a form of premeditated murder. The role of law must be to correct nature and not to act like nature. If murder is the crime of nature, then law mustn’t act like nature itself. Rather, law must seek to rectify it.

Another crucial aspect while awarding death penalty is the possibility of error in any judgment. The death penalty might be too late for rectifying an error, as in the case of Burton Abbott, who was put in the gas chamber on 15 March, 1957 in California. He was accused of murdering a fourteen year old girl. His execution was scheduled at 10.00 in the morning. At 9.10, a delay was granted to his lawyers to make a final appeal. At 11.00 the appeal was refused. At 11.15, Abbott was put in the gas chamber. At 11.18, he inhaled the first whiffs of the gas. At 11.20, the secretary of the Committee on Reprieve changed his mind and decided to commute Abbott’s death penalty. They tried to get it approved by the governor but he was out sailing. They, then, phoned the prison directly. But it was too late and Abbott didn’t survive. The strange case of Abbott’s execution makes Camus conclude: ‘…today Abbott would be alive and would perhaps see his innocence proved. Any other penalty, even the harshest, would have left him that chance. The death penalty left him none.’

In fact, an error in judgment had forced Belgium to abolish death penalty.

In an oft-repeated argument, Camus opines that taking a life deprives even the worst criminal a chance to make amends. While he doesn’t believe in the natural goodness of man, he feels that no one is absolutely innocent, including those who judge a guilty person. Catholicism has always favored death penalty as it sees the death of a criminal as his chance for repentance and deliverance from earthly life; God is the final arbiter. Death is supposed to act as a way to face God’s judgment. However, for Camus, the problem with such a position is that having replaced religion, or reducing it to a mere symbol, the society has come to assume the supreme power. Since no member of the society, according to Camus, is absolutely innocent, no member of that society has any right to pronounce an absolute judgment on anyone.

Death penalty is also untenable on the basis of realism. Camus claims that death penalty has come to serve as a political tool in the hands of powerful States. Consequently, the State has killed more people than any crime. The hanging of Afzal Guru and the scheduled hanging of Yakub Menon confirm how the Indian state periodically hangs the Muslim ‘other’ for reclaiming lost political space by the ruling dispensation. Camus corroborates this when he writes, ‘There are fewer and fewer condemned by common law and more and more condemned for political reasons.’

Camus writes his essay with the premise that a detailed description of the crudeness of the act might arouse public conscience: ‘…if people are shown the machine, made to touch the wood and steel and to hear the sound of a head falling, then public imagination, suddenly awakened, will repudiate both the vocabulary and the penalty.’  His piece, however, ends up more as a moral and philosophical argument against death penalty.

For a more intimate sociological account of the process of execution, we need to turn to George Orwell. In his short essay, ‘A Hanging’, he narrates the execution of a condemned man in a Burmese prison.

As the condemned man is taken to the gallows, in the company of jail warders and superintendents, he walks with a steady pace. As he comes across a puddle in the jail-yard, he carefully avoids it. In that split-second, Orwell realizes that the condemned man is as alive as anyone else and his mind, consciousness, and body function like that of others. Orwell describes in detail how he suddenly realizes the humaneness of the man, who was until then a mere convict:

‘It is curious, but till that moment I had never realized what it means to destroy a healthy, conscious man. When I saw the prisoner step aside to avoid the puddle, I saw the mystery, the unspeakable wrongness, of cutting a life short when it is in full tide. This man was not dying, he was alive just as we were alive. All the organs of his body were working – bowels digesting food, skin renewing itself, nails growing, tissues forming – all toiling away in solemn foolery. His nails would still be growing when he stood on the drop, when he was falling through the air with a tenth of a second to live. His eyes saw the yellow gravel and the grey walls, and his brain still remembered, foresaw, reasoned – reasoned even about puddles. He and we were a party of men walking together, seeing, hearing, feeling, understanding the same world; and in two minutes, with a sudden snap, one of us would be gone–one mind less, one world less.’

Camus, finally, makes a similar point that no human being, no society, and no State has a right over the life of another being. To judge another person, those who are judging must be absolutely innocent. Otherwise, the law legitimizing death penalty becomes a ‘law of retaliation’.

Mosarrap H. Khan is a doctoral candidate in the Dept. of English, New York University. He researches in the area of Muslim everyday life in South Asia. He is an editor of Cafe Dissensus.