Rayyan, a 23-year-old enthusiastic college going student, is not very happy with the work that has been done so far by the state and central government in his hometown, Rampur. “There are no factories, no good colleges and we don’t see any of the development we grew up hearing about. We want to stay here forever but the need for livelihood forces us to leave this town.” Unfortunately, in this city, once inhabited by the royals, most of the youth think the same way.

Rampur is a small city in the state of Uttar Pradesh, situated around 314 KM away from the state capital, Lucknow. It has a royal and splendorous past. Nawab Faizullah Khan was the first ruler of Rampur, whose name is still discussed by its residents. The rule of the Nawabs came to an end after India secured its independence and the new Home Minister, Sardar Vallabhbhai Patel, asked all the states to surrender their crown and merge into the Republic of India.

Rampur has a remarkable history and some of its past glory could be gauged by the historical buildings that still stand as a testament to its past. A great historical treasure, Raza Library, was constructed by Rampur’s royals at the heart of the city, which is a reminder of the kingdom’s glorious days of championing the causes of learning. The library is a unique centre for the preservation of historical manuscripts written in Urdu, Hindi, Pashto, and Sanskrit. It also contains the first translated copy of the Quran into Pashto. This perfect sanctuary of knowledge and learning was an outcome of the efforts made by Rampur’s first Nawab, Faizullah Khan. 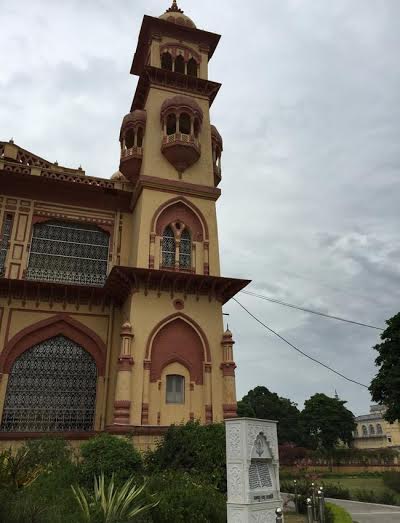 Ravish Kumar, the well-regarded journalist from NDTV, visited the library a couple of months ago and depicted the uniqueness of the library’s minarets. The library’s minarets seemed to convey a massage of religious harmony, as it represents four major religions in India: the first part of the minaret at the bottom is built in the shape of a Mosque, the part just above this resembles a Church, the third part reflects the architectural design of a Sikh Gurudwara and the top most part of the minaret is built in the shape of a Hindu temple.

Kumar referred to the library’s minaret as a perfect example of India’s inclusive culture, which couldn’t have been constructed without the assent of the Nawab. It remains a mystery why this unique architectural wonder didn’t attract a wider attention so far. Was it because it was constructed by a Muslim ruler?

Apart from the library, the city is full of other historical buildings such as Jama Masjid and   Gandhi Samadhi, which often attract a lot of tourists.

Most of the shops get closed around 9 pm with a few exceptions, which are open until midnight. People usually gather around those shops open late into the night to share lighter conversations. At around 11 pm, Harshit, along with his friends, was standing a few meters away from the   major police station in the city. He said, “Staying awake the whole night and sleeping during the day is something which people in Rampur love.” His friends nodded in assent and said, “We love the peace, affection, and most importantly the friendly nature of the residents here. Despite not earning enough here, this doesn’t allow us to go anywhere else.”

Rampur is also well known for its special knife, known as the ‘Rampuri Chaku’, which made its appearance in Bollywood movies during the 70s and 80s. The making of the knife provided livelihood to scores of people, until the government of India decreed that the blade of the knife couldn’t be longer than 40 inches. This deprived a number of artisans their daily income.

Over half the population in Rampur constitutes of Muslims; Hindus constitute 47% of the local population, along with a minor presence of Sikhs and Christians. All the communities live together with affection and people have friends from other communities. One could hear the sounds of Azan and Pooja simultaneously here. “Both communities respect each other,” says Sharad and Faiz, who are childhood friends, standing at the corner of the street. They further add, “Rampur is a perfect model of communal harmony, which is a legacy from our forefathers. That is what keeps us connected strongly, irrespective of caste, creed and, most importantly, religion.”

Maulana Azad was the first MP from Rampur, who also became the first education minister of independent India. Since then Rampur has been a hub of key leaders in Uttar Pradesh politics as well as the center. Currently, Azam Khan, the most powerful leader in Uttar Pradesh after Chief Minister Akhilesh Yadav, hails from Rampur. A major Muslim face in the BJP, Mukhtar Abbas Naqvi, also shares a very deep connection with the city. Besides these two powerful faces of Indian politics, the widow of Nawab Syed Zulfiqar Ali Khan, Begum Noorbano and her son, Nawab Kazim Ali Khan, who is also a Member of the State Legislative Assembly, have strong political connections with Rampur.

Despite being a city of many powerful leaders in Indian politics, Rampur has remained stagnated as jobs for the youth have dried up because of lack of industries. Many of the city residents attribute this to their bad luck. “When a neighboring state, which is approximately 60 kms away, can attract plenty of industries, why can’t our city do the same?” asked a women, who refused to disclose her name. Even the neighboring cities such as Moradabad and Bareilly, which are also part of UP, have made considerable progress in the past few years, Rampur has failed to attract investors.

Rampur scores very low on the literacy index and one-fourth of Rampur’s population live below the poverty line. In many cases, students withdraw from their study due to their elders’ pressure to earn as early as possible. After leaving study, students have a very few alternatives. Either they join a tailoring shop or carpentry, where they earn a meager amount of money while doing apprenticeship. Besides this, they also look for other work where they can earn a quick buck. In most cases, they learn handicraft, which can be mastered within two or three months, unlike other similar works, which demand more time and hard work.

The jobless people in the city are eager to copy each other. Around a couple of years ago, a battery rickshaw landed on the city’s streets. Now there are over a thousand of such rickshaws in this tiny city. When I approached a rickshaw puller to get the exact picture, he said, “Bhai, I didn’t buy this happily. I am aware that the city is overcrowded with such rickshaws. But when all other alternatives closed, I borrowed this to feed my family.”

Syed Kamran Ali is a commerce graduate from Rampur (UP), who writes on the marginalized sections of society. Currently, he is a Writer Intern with Cafe Dissensus Everyday. Email: syedkamranali2@gmail.com.

One Response to “Rampur: A City of Royals”