Starting with a simple and single demand of giving highest punishment to the war criminals, the impetuous protestation at Shahabag square has spread all over the country turning itself and the whole political scenario of Bangladesh into a complicated one. Politics of Bangladesh has been affected by this protestation to such an extent that the whole country is divided into two groups and the two major political alliances are in a hurry to take advantage of it. Everybody is now in a gasp, does not know what is happening in the next moment, and confused just like a typical modern literary character. The writers, journalists, and bloggers – all have a personal interpretation of the Shahabag movement.

First and foremost, why did the young generation gather at Shahabag Square for assuring highest punishment of the war criminals after a long 42 years? The simple answer is that the past initiatives have totally failed. After the independence of Bangladesh, President Sheikh Mujibur Rahman announced general amnesty for the collaborators, who were not convicted of major crimes, and continued the process of justice involving war criminals who were convicted of murdering, slaying, raping, and torturing religious minority groups. This process was stopped by an ordinance after President Sheikh Mujibur Rahman was killed brutally along with his family members.

Later, in the late 70s when Ziaur Rahman was president of Bangladesh, Muktijoddha Samsad (an organization of freedom fighters) held another powerful protestation to force the president (as he was unwilling to do so) to initiate a judicial process, led by retired Colonel Kazi Nuruzzaman, to indict of war criminals. This initiative ended fruitlessly as Ziaur Rahman too was killed brutally by a group of military officers. 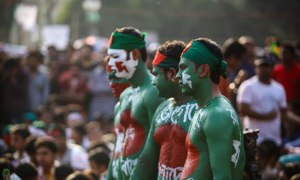 another large protestation in 1992. It met the same fate like past initiatives as she died of cancer and war criminals used Babri Mosque incidence trickily to turn public opinion from it. In a way, the present young generation of Bangladeshis gathers at Shahabag Square to bring a resolution the post-liberation war tasks after 42 years.

Secondly, what is happening out there at Shahabag Square? After the human chain of fifty men on February 5, Shahabag Square has experienced the greatest crowd swell after 7 March, 1971 when Sheikh Mujibur Rahman called for independence.       No doubt, much dissatisfaction with all the governments for last 42 years is the impetus behind this huge mob. Protesters have the events of Arab Spring still fresh in their memory. It inspires them to gather at Shahabag and protest against the government. Many of them think it as a way to raise demands one after another. Some start to believe this movement as a revolution and several others as a path to call for revolution.

As it is a large mob, the whole politics of the country revolves around this place. The opposition alliance first tried to prove that this protestation was led by Awami League because the main war criminals belong to the second largest party Jamaat-e-Islam of this alliance. Failing to prove it immediately, Jamaat has planned to divide the mob as well as the country into the theists and atheists. It is easier for them to execute the plan as religion is still a sentimental issue to most of the people and some of the bloggers have written attacking religion. The Jamaat has termed the movement as a protestation of atheists and it has killed an atheist blogger to garner the support of orthodox people. May be this is the ugliest part of their conspiracy that they have not only killed the blogger but made fake blogs using his name. These blogs are written harshly against religion especially against Prophet Hazrat Muhammad (SM) and they are disseminated efficiently.

A portion of the people is influenced by the Jamaat-e-Islam propaganda that aims to create great anarchy. A horrified situation was created throughout the country after the verdict against another war criminal Delowar Hussain Saidy who is also a leader of Jaamat-e-Islam. Since the anarchic situation, many people including activists of several political parties, police, and general people have been killed in the clash and a huge amount of public and private properties have been destroyed. In this situation, BNP (Bangladesh Nationalist Party), the main opposition party of Bangladesh, uses this anarchic situation as a chance to demand a care-taker government before election.

But to the protesters, the greatest disappointment comes from ruling Awami League which claims to be a partisan wing of liberation war. As the public and movements enlarge their list of demands, Awami League wants the movement to end as early as possible. But they do not repress the movement thinking that it may further fuel it. Rather, they have gradually taken control of the movement. There may be another reason behind their fear. That people might unite once they feel the government is trying to divide the movement. In most cases, people are divided and do not know the strength of public unity.

From the beginning, Awami League has tried to appropriate Shahabag movement as their movement. All these incidents make the people confused. These modern symptoms of meaninglessness, confusion, and dilemma influence the young generations now, especially since the elders suffer from the same disease already. Some young protesters find nothingness at the heart of this movement, some are hopeless about the punishment of the war criminals, and some are confused and cannot understand what to do. While the opposition alliance is happy with the present scenario, some young people are working to make the movement successful believing that the movement could be taken to its logical goal.

The movement has already proved to have a long term impact on the nation, irrespective of the results. If it ends successfully, though that remains a distant possibility, people would be inspired to raise further demands using this experience which may change the future of Bangladesh. If it is over without anything positive, then it will be preserved in the memory like a dormant volcano that would give strength in future. Some positive aspects also may provide optimism to the leftists and communists who believe that the movement has transformed the political consciousness of ordinary people and it will be much easier to mobilize them in future.

Already the law of the tribunal has been amended in parliament which is a rare feat in this country. The progressive people of Bangladesh are again waiting with hope to see that proper punishment is meted out to war criminals, waiting for a government system responsive to the needs of people, and hoping to see a better sovereign Bangladesh.

[Md. Nazmul Hasan is an English Major from Jagannath University. He lives in Dhaka.]