Sunanda Pushkar was truly the damsel in distress all her life. She was born to a Kashmiri Pandit family, where her father was an Indian army officer. Her family was evicted during 1990 Kashmiri Pandit exodus from Kashmir, while their house was set on fire by a rioting mob. Since then her life has been a roller-coaster ride. She got married thrice including the one with Shashi Tharoor. She had to travel to different countries for the sake of her career. Even though she had finally succeeded in becoming an entrepreneur, the road had been rocky from time to time.

In 2007, Sunanda Pushkar met Shashi Tharoor in a party in Dubai, while Mr. Tharoor was still with his second wife Christa. In 2010, they got married.

In 2010, the IPL controversy broke out when Sunanda Pushkar was made the director of Rendezvous Sports World, with 70 crore rupees equity in her name. Public perception was that she was playing a proxy for her boyfriend, Shashi Tharoor. However, she maintained that she got this on the merit of her successful business administrative background. Shashi Tharoor had to resign eventually as a union minister. Later in 2013-2014, she alleged via social media, that she had to bear all the trouble to save her famous husband, Mr. Tharoor. 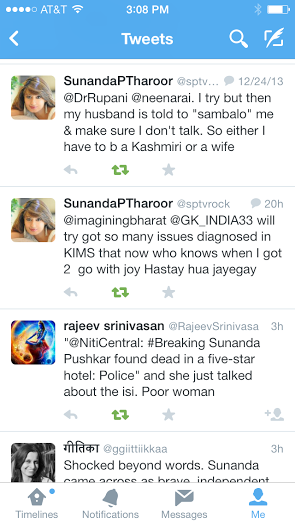 In early December, in an election rally in Kashmir, Mr. Narendra Modi raked up the issue of discussion on article 370, which attracted sharp reaction from his political opponents. This time around, he found an unusual ally in Sunanda Pushkar, who happens to be an evicted Kashmiri, who married  a non-Kashmiri and was a victim of Kashmir’s discriminating land law, which does not follow Indian law because of article 370. Indian National Congress saw red in her behavior and, subsequently, asked her through her husband to keep quiet on this issue. She later revealed on social media, how she had been asked to be ‘sambhaloed’ (keep quiet) by top congress leadership.

In January 15, 2014 Shashi Tharoor’s twitter account expressed his love for a certain Mehr Tarar, a Pakistani journalist. Mr. Tharoor’s account was allegedly hacked. Later Sunanda Pushkar clarified that it was she, who tweeted those tweets from her husband’s account to make the secret love-affair between Mehr Tarar and Shashi Tharoor public. Indian mainstream media, while partly covering the issue, kept a distance citing it was a personal matter for the couple. Sunanda Pushkar defiantly accused Mehr Tarar of honey trapping Mr. Tharoor, at the behest of ISI, the Pakistani intelligence agency. Her voices was thwarted by a section of mainstream media (with apparent leaning towards Congress), fearing the issue may give ammunition to the opposition Bharatiya Janata Party. A day later a joint statement was put up on Shashi Tharoor’s Facebook page, saying they were a happy couple. Mehr Tarar obviously rubbished all the allegations of being involved with Mr. Tharoor, though Ms. Tarar’s older communication on social media did show her admiration for Shashi Tharoor and a sense of aggravation towards Sunanda Pushkar.

On the fateful morning of January 17, 2014, Sunanda Pushkar called up few of her close journalist friends and wanted to give an exclusive interview, revealing some inside story of a conspiracy involving Pakistani agency ISI. In social media, she also expressed her fear of being killed, as she apparently knew too much.

Mr. Subramanian Swamy, an eminent Indian lawyer and activist, claimed that Sunanda’s death was initiated by a polonium-based Russian drug. The night before she died, she spoke to eminent journalist Ms. Nalini Singh over phone seeking her help on finding evidence against certain individuals. One newspaper revealed that for a few hours before and after her death, the CCTV cameras were switched off on the floor she was living. Four persons were found in the hotel, who checked in with false passports. Doctors doing her autopsy report claimed that they were threatened to suppress the reason for her death. Twelve injury marks were found in her body, one suggesting force-feeding. All these facts point to one thing. That there is more than what meets the public eyes. Forensic evidences were sent to the FBI laboratory for further investigation. And one year after her death, a murder case has been finally filed by Delhi Police.

The real truth may be revealed after probe or might be swept under the carpet for ever. But Sunanda Pushkar’s death will always be a talking point in Indian history. If Dr. Swamy’s theories are found to be true, it has the potential of unveiling some inconvenient truth about Indian polity. There is a smell of conspiracy in the air. One of the most fascinating women, connected to the Indian power-corridors, is probably having a laugh away from worldly eventualities.

Different news reports, concerning Sunanda Pushkar’s death are given below:

(Screenshots for the tweets are provided by the author. Picture-credit: Here)

Soumya Sundar Chowdhury is a Civil Engineer by profession. He completed undergraduate degree in Construction Engineering at Jadavpur University and graduate studies at West Virginia University in Civil Engineering. An avid follower of Indian and world politics, his opinions are personal and mostly right-leaning.

Disclaimer: The views expressed here are author’s own and don’t necessarily reflect the views of Café Dissensus Everyday.