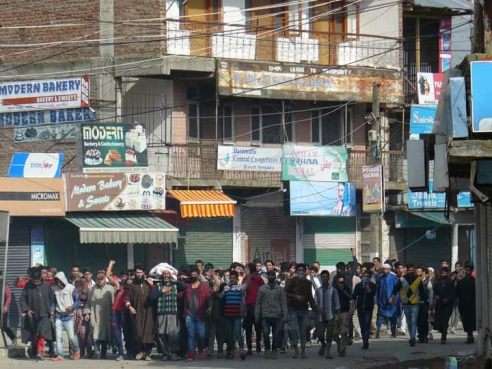 I see pictures on social media. They pour in every now and then. Five dead in four days. What had those kids and the old lady done?

This is what headlines read in newspapers in Kashmir. The little descriptions about the killings are haunting.

Everybody is in mourning.

There is blood in the streets. It is mayhem. In the pictures, the enemy soldiers intimidate grieving women with rifles.

We will open fire.

In one picture, one woman is daring the solider to shoot her. She has thrust her head into the muzzle of his rifle. The soldier is standing clueless. Her defiance is threatening his presence. He does not know what to do.

His rifle is on her forehead. She speaks it on his face: Go back. Leave Kashmir.

How will he silence her resistance?

How will he defeat her courage with a gun?

She speaks it on his face, he looks bewildered:

Hum kya chahte? (What do we want?)

(And, at this point other women join in.)

As salaam as salaam – aye shaheed as salaam (Hail! Hail! Hail the martyrs!)

The lightning has struck the soldier. It has split him into two halves. He knows he will never be able to take away her love for martyrs, their love and her love for freedom, from her heart. Then, in a fit of frustration, he resorts to violence. 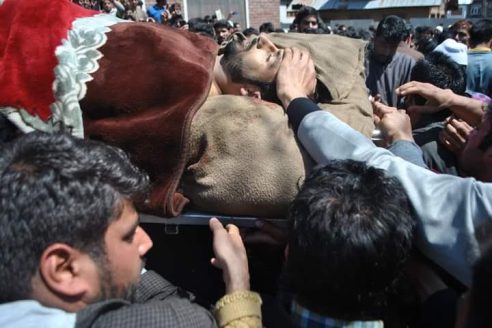 In other pictures, men are carrying martyrs to the graveyard in a procession. On the way they are singing songs of freedom to them. They are bidding them farewell.

They are carrying their coffins in turns, past sentries, past barracks, past everything, rowing them into dawn. Over the mist of the night.

“How did we trade roles, my son, how did you precede me.
I first, I the first one!”

Elsewhere in Kashmir, there is curfew. The roads are forlorn. Desolation barks at me from a distance. I feel for my heart. It pronounces that blessed word. But it also lets out a cry. I ring my mother and ask her: “How is everyone at home?”

Her voice reflects agony. She says:

“Did you hear how they killed a promising cricketer in Handwor?
There is curfew. Protests are going on. I hear sirens only.
Young boys are dying. As young as you.” 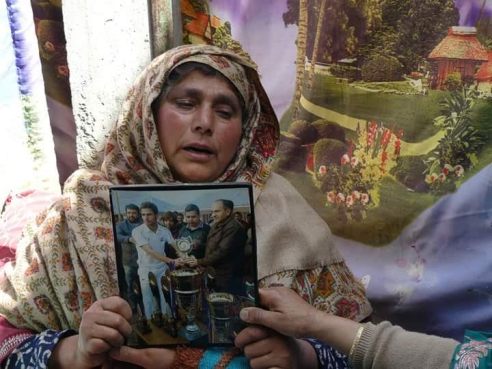 I know. I want to tell her, I saw how his mother had clutched on to his photograph. It is haunting.

I cannot believe he is dead. But the call disconnects. I only hear the beep.

Then for awhile I stare at another picture in which a young woman is wailing at her dead mother’s coffin.

An old memory returns to me. I remember my mother. I remember her telling me how she survived the Kupwara Massacre in 1994.

I turn to ice. What can I write about the grief of this girl who has lost her mother to the oppression of India?

She will not want to know what I have written. She will just ask me, where has her mother gone? I will have no answer to her simple question.

Now we only write, and not stand up to what they stood for, even when they were dying.

No, we won’t forget them. We won’t let them down.

Bio:
Omair Bhat is an aspiring poet from Kashmir.

3 Responses to “How do we mourn our martyrs of Kashmir?”