In the pilot episode of The Sopranos, Tony Soprano, head of the DiMeo crime family, who is diagnosed with frequent panic attacks, tells his therapist, “Let me tell ya something. Nowadays, everybody’s gotta go to shrinks, and counsellors…and talk about their problems. What happened to Gary Cooper? The strong, silent type. That was an American. He wasn’t in touch with his feelings. He just did what he had to do. See, what they didn’t know was once they got Gary Cooper in touch with his feelings that they wouldn’t be able to shut him up! And then it’s dysfunction this, and dysfunction that, and dysfunction vaffancul!” What is it about this expression—diligently placed in the very first episode—that establishes the show’s appeal as a dark comedy? The director, David Chase, said that the inspiration behind making the show was to narrate “the reality of being a mobster.” This reality of a mobster as a violent, sexist, criminal is something we are coerced into sympathising with because we are shown that he too can have panic attacks, he too can have a fascist mother, he too has principles. The show banks on these responses because its very being is premised on the assumption that we don’t see them as human enough.

In equal measures dark and comical is the current scene at JNU’s freedom square where the ABVP rebels(?) without a cause are staging a hunger strike alongside the condemned lot whose crimes have now been reported by the JNU administration to the Special Cell. 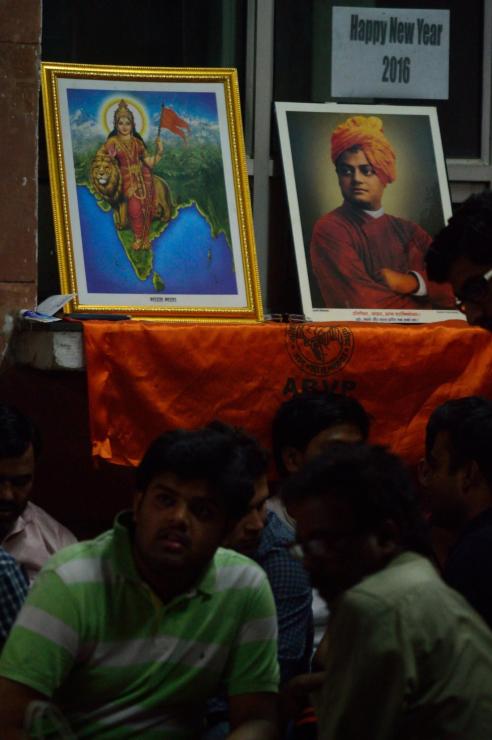 Sitting hungry at the square are five students from the ABVP against the picture of Bharat Mata with a saffron flag in her hand. The irony is too overwhelming to deserve a deeper investigation in this piece. What this article instead strives to unearth is quite simply, the ends and the means; which means to what ends! What is it that the ABVP wants? To be fair to them, they do have a point. They believe Saurabh  Sharma’s indictment is a “criminalisation of patriotism”. Sharma’s diligent manoeuvring of the JNU row that made #ShutdownJNU trend nationwide and led to the arrest of his peers was of course for the love of the country. Let us not question the obvious. Let us also not mull over trivialities like the fact that this was engineered by his party’s own parent organisation, or that the infamous videos were doctored by a channel that he himself had personally escorted to the campus, or that his group has been in cahoots with the JNU administration since Day 1. Spearheading the cause of restoring the saffron flag in Bharat Mata’s hands is not an easy job. After all, everything is fair in love and war, and this, most certainly, has both the elements. It is a war for love—love for Bharat Mata.

Also not easy is giving up the food that Bharat Mata has blessed you with, despite the best efforts of some lying and greedy farmers. Hunger strikes in India, as a matter of fact, were abolished by the British Government in 1861. The history of our freedom movement is replete with instances of fasts-unto-death as a means to attack the conscience of the oppressor. Bhagat Singh became a national hero with his world record of 116 days, breaking the previous record of 97 days. Mahatma Gandhi, of course, became the face of the Satyagraha movement against the draconian government policies. Most importantly, the definitive characteristic of a hunger strike is the fact that it is rooted in a practice of nonviolence. There is something amiss in what’s currently unfolding at the Freedom Square in JNU, something that makes everyone around me chuckle when they hear that the ABVP is staging a hunger strike. For an organisation that has a glorious history of showing no restraint when it comes to Bharat Mata (or her favourite sons), there is something deeply comical and, to a great extent, satisfying, about the ABVP showing some faith in non-violence. In his fascinating treatise ‘Why I Killed Gandhi’, one of Nathuram Godse’s allegations against Gandhi was his violent pacifism”. He wrote:

It is my firm belief that in dubbing Rama, Krishna and Arjuna as guilty of violence, the Mahatma betrayed a total ignorance of the springs of human action. In more recent history, it was the heroic fight put up by Chhatrapati Shivaji that first checked and eventually destroyed the Muslim tyranny in India. In condemning history’s towering warriors like Shivaji, Rana Pratap and Guru Gobind Singh as misguided patriots, Gandhiji has merely exposed his self-conceit. He was, paradoxical as it may appear, a violent pacifist who brought untold calamities on the country in the name of truth and non-violence, while Rana Pratap, Shivaji and the Guru will remain enshrined in the hearts of their countrymen for ever for the freedom they brought to them.

For an organisation that never quite bought the myth of non-violence, why is it that the ABVP today has opted for a non-violent method where they must rub shoulders with the traitors while defending a cause whose very inception lay in their violent opposition to a non-violent protest? Is the ABVP, then, seeking legitimacy by taking the recourse of the non-Right? If so, one must see this performance more as a cry for help, rather than anything else the jingoists make it out to be. In all fairness, let us not burden our ABVP friends with baseless accusations of depth and wit.

Let’s not even call the hunger strike a paradox—even if all eligibility clauses are met. Let’s not call it a facade—despite what our better judgment tell us. And let us please not mock their valiant descent—would you rather have khoon ke tilak? If the ABVP’s decision of sitting on a hunger strike instead of embellishing us with their khoon ka tilak and goliyon ki aarti is not a victory, I don’t know what is! Perhaps one must consult Mr Jaitley on this—he has grown quite adept at announcing victories—moral and otherwise. So what if he lost the Parliamentary elections? What has democracy got to do with it anyway!

Bio:
Sania Hashmi is an MPhil Scholar at the Centre for English Studies, JNU.

One Response to “ABVP Ko Gussa Kyun Aata Hai? Or, Why We Must Sympathise With the ABVP”