In today’s world, the environment faces constant challenges due to deforestation, climate change, water pollution and silting of rivers. These challenges lead to reduced food security, thereby threatening the existence of humans. Our country, India, is no exception, and with a population of 1.31 billion, one of the major challenges that we face is sustainable production of food and access to nutritious food. In this regard, fish and fishing industry in India plays an important role in not only providing food security but also employment to a large fraction of the Indian population. However, the fisheries sector in India faces several challenges including slower reproduction rate leading to lower production of food species, emergence and spread of diseases, and loss of habitat due to human encroachment. Last but not the least, one of the growing concerns in the field of fisheries research and aquaculture is the entry and spread of non-native or exotic fishes altering the stability of the native ecosystem in the open rivers.

The indiscriminate and unmonitored entry and transfer of the exotic species is particularly alarming, and raises several concerns like introduction of new parasites and diseases, increased competition for resources and further, the generation of hybrids leading to a loss of genetically pure strains of the native species. Most of the entries of the exotic fish into the open water systems has been due to accidents. For example, silver carp, a freshwater species native to China and a voracious plankton feeder, was transported to North America to feed on the extra food in the aquaculture ponds and, thus, for keeping the ponds clean. However, the fish escaped the closed ponds systems and was accidently released into the open water systems of the Mississippi and Illinois River systems. In this regard, one should also be careful while releasing aquarium pet fishes of unknown origin into the open water systems, this could possibly introduce the exotic species into a new environment.

Exotic fish species is any species that has been transported and released by humans into an environment that is outside the native range of the species. If an exotic species negatively impacts the native ecosystems, then it becomes invasive in the introduced habitat and may threaten the sustenance of the native species. However, despite the uncontrolled introduction of exotic fishes across the world, there is no systematic study on most of the exotic species and we are not aware of the potential damage or impact that the species may have on the native environment. To assess the impact that an exotic species may have in the introduced habitat requires organized, consolidated research programs, which is presently lacking across the globe. The scenario is no different in India. India has a rich aquatic biodiversity of over 2319 finfish species, and the aquaculture industry provides a sustainable nutritional security in a developing country like India. However, there have been several reports documenting the presence and spread of multiple exotic fish species within the Indian aquatic ecosystem. For example, the suckermouth catfish, a native to South America and a popular aquarium species, has spread into the open waters in several states like Andhra Pradesh, Bihar, and West Bengal. These catfish have a hard external armor and are highly oxygen tolerant, with no value as a food fish and face no predation pressure in the introduced range. Besides few preliminary and ad libitum observations, there has been no systematic study of the impact of the introduced catfish on the native ecosystem. 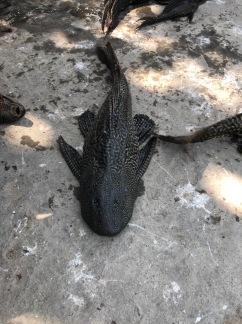 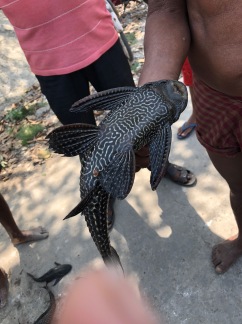 Similar reports are available for other species, like the African Catfish and Red Piranha in the open waters of India, which are highly carnivorous and may become a serious threat to the indigenous small fish and towards the fry of highly prized food fish like the Rohu or Catla. In some rivers, like the longest river in Kerala, Bharathapuzha, the exotic Tilapia now dominates the indigenous fish population, thus, replacing the native fishes. Such replacement and wide spread distribution of the exotic species will not only lead to the loss of the biodiversity of the country but may also drive the native species to extinction.

Once the research has shown that a particular exotic species is harmful for the native ecosystem, and now being termed as invasive in the introduced range, traditional tools like netting, fishing, river surveys through catch-release mechanisms are implemented to control the spread of the invasive species. However, traditional gears are not sufficient for controlling and managing the invasive fish species. Besides being labor-intensive, these invasive gears are non-targeted, as they do not differentiate between native and exotic species, and are of limited use in low-density, high flow habitats. Thus, current research is now focused on applying non-invasive, biochemical and molecular tools that are species-specific in nature. One of the important aspects to control an invasive species is to develop a species-specific tool to detect the presence of the species and to assess their accurate density. In this context, one of the modern, molecular tools that have been extensively used is environmental DNA or eDNA measurements. eDNA is the DNA or genetic material that is released by the fish into the surrounding water through mucus, urine, feces and milt. Laboratory measurements of the fish holding water are then carried out using quantitative polymerase chain reaction (PCR) methods with species-specific primers. A single water sample from the field when analyzed using the eDNA technique, can provide information on multiple parameters, like the species identity, abundance and density of fish. Further, all this information is contained for multiple species in a single water sample and can be measured in a single eDNA assay. eDNA method has been the most preferred tool for invasive fish research, and has become the backbone of aquatic species research in many countries, like the United States, Europe and Australia. In these countries, eDNA method has been successfully applied to detect the presence and measure the density of several exotic species, like the Common Carp, Grass Carp, Silver Carp, Mozambique Tilapia. Further, researchers across the globe have also integrated the eDNA method with traditional gears like netting/trapping to account for efficient targeted removal. However, the technique has never been applied to the Indian context, and with the invasion of multiple exotic fish species, this technique can provide valuable information on the presence/absence, density, and identity of a species in one go.

Management and detection of invasive fishes require coordinated nationwide efforts. The alarming rate at which the aquatic habitats of our country are getting invaded raises concern and urges for a consolidated effort to combat the invasion. Thus, improvised methods like the species-specific eDNA technique needs to be integrated as a part of the management curriculum, and this will be a critical advancement towards an organized and systematic fight against the invasive species. Several new innovative areas of research like development of additional species-specific biomarkers like pheromones and introducing species-specific diseases among the invasive species warrants further investigation to develop a new management regime for the aquatic invasive species.

Bio:
Dr. Ratna Ghosal is an assistant professor at the Biology and Life Sciences department at the Ahmedabad University. She pursues her research and teaching interests in the field of conservation biology, animal behavior, and animal physiology.