The Study shows that Muslims, with 14.2 percent population according to Census 2011, are lagging behind in all parameters of development index. The total sample size for the study was 3400, which included both Muslim and Non-Muslim respondents in 13 states, including West Bengal, Assam, Gujarat, Telangana, Tamil Nadu, Karnataka, Jammu and Kashmir.

In today’s world and times, it is important to look at what the vision for Indian Muslims should look like. Formulating a vision statement for an entire community is an onerous responsibility and therefore needs to be done with great care and wide consultations across the country to garner thoughts on what Muslims in India today face and what the country holds out for them in the next ten years. The study, which was coordinated by Dr. Amir Ullah Khan and Dr. Abdul Azim Akhtar, is divided into five parts, each one focusing on gathering various strands of insight and information, and include a nationwide survey, state level workshops, national conference, interviews with people, and research papers from experts and researchers. The attempt is to bring together views from all sections of society.

Professor Amitabdh Kundu on the Vision 2025: “The report has done an excellent job in focusing on these conditions and highlighting the critical explanatory factors behind disparity and deprivation with empirical rigour. A development strategy envisioning a modern, vibrant, and inclusive India must address these issues with conviction and determination.” 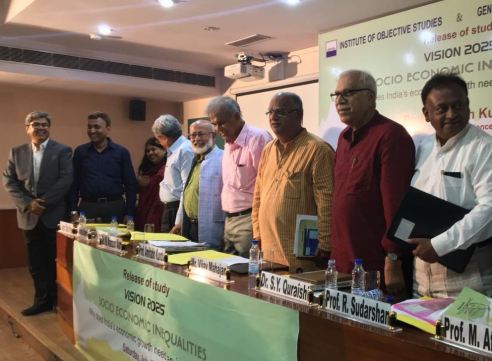 Excerpts from the book

In his foreword, Prof. Amitabh Kundu writes: “A vision of India 2025, for having relevance in policy domain, too, must put forward a perspective of development interventions to mitigate the alarming inequalities in the system and propose measures for ameliorating the conditions of the poor and vulnerable. Any analysis of recent data would demonstrate that Muslims constitute the largest majority in both the categories.”

In his Preface, economist Amir Ullah Khan writes, “This large piece of work tries to bring together various views and debates on the subject of deprivation and discrimination of Muslims.”

Historian Abdul Azim Akhtar says, “The study despite its limited resources and access to information, being a non-government initiative attempts to go beyond the existing data and figures. We have tried to included voices of people who are either working in the field or are directly witness to the areas of education, health, security, employment, and political representation. We try to fill the gaps and also provide ample scope for further research in the field.”

The Editors of the report Amir Ullah Khan and Abdul Azim Akhtar write, “We envision an India in 2025, where all Muslims are assured of, and have access to, equitable and inclusive growth through public and private service delivery and are able to pursue their aspirations with the optimal health, education, wellbeing, and quality of life.”

In the interview Section, there is an important interview with late Justice Rajinder Sachar. He was not sure about the changes over the last few years. He defended the government’s decision to appoint the committee and said, “Many people argue against Sachar Committee. Why you did this? Why did not you study about Hindus? This is not about Muslims, it actually compares the position of Muslims with other sections of society.” He considers communalism, inequality, education, and population figures as challenges for the Muslims. He called for deployment of Muslim officers in Muslim-dominated areas. He also called for better ration of Muslims in Police forces to ensure security and safety for Muslims. On the issue of Babri Masjid, he said, “Many People said that Muslims should move on…what move on? According to me, the whole land has to be given to Muslims. You cannot hurt psychology of such a deep nature.”

Between 1999 and 2011, the least change in per capita incomes was seen among the Muslims.

The reservation policy was lopsided; STs and Muslims top the list of large populations that have never attended any school;

A large percentage of Muslims live in rented accommodation.

The problems with credit availability were reported by the most number of people.

Education: There is a special need to improve quality of education in schools. Successful interventions like the Gyan Shala or the ENH Foundation’s initiatives can be brought in to help primary schools achieve quality education.

Both Public and Private Universities must recruit larger number of Muslims in their higher education programs.

Health: Improvement of public health facilities by setting up more hospitals in the Muslim-dominated localities is a necessity.

Entrepreneurship and employment: Most Muslims are engaged in self-employment activities and their participation in agricultural activity is very low. So, policies for employment generation within the Muslims should target non-agricultural sectors.

Housing: The government should ensure equity in housing. So, 20% of houses in urban areas and 5% in rural areas should be allocated to Muslims.

Credit and Financial Inclusion: There shall be group-lending approach to Muslims, who mostly work in informal sectors and seek petty loans.

Government employment: To overcome the under-representation of Muslims in administrative services like the IAS, IPS, and IFS, attempts should be made to fill the gap through promotion quota from cadres in state service.

“Muslims across the country have had lesser exposure and access than the average Indian to primary education, healthcare and credit, and have often fallen prey to discrimination and ethnic violence. Issues pertaining to inadequacy in education, lack of institutional support, weak economic conditions, lack of employment and employability, cultural gap, inadequate representation in administrative bodies, lack of security, lack of adequate reservations, etc. have cropped up time and again in recent history.”