By Rana Anani and Bashir Makhoul 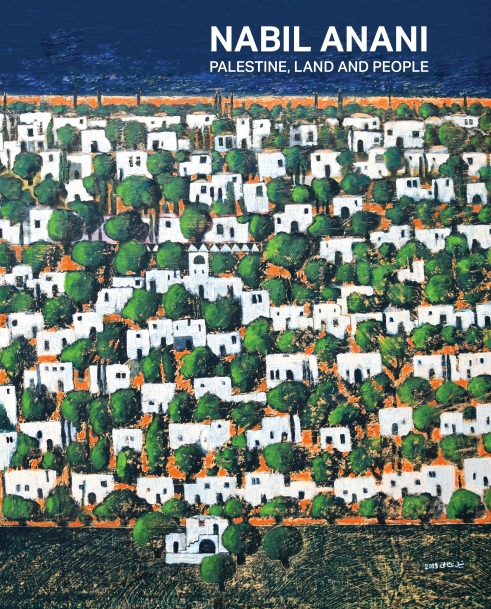 Nabil Anani is one of the most prominent Palestinian artists working today. Anani’s development has run in parallel with major events in recent Palestinian history. His work reflects the lived Palestinian experience, exhibiting distinctive responses to issues of exile, dislocation, conflict, memory, and loss. Anani’s artistic vision restores and celebrates a denied and often-forgotten reality, his work re-igniting memory.

Nabil Anani: Palestine, Land and People is the first monograph of Anani’s work. This artbook brings together over 150 pieces of Anani’s work, spanning five decades and many mediums. A painter, ceramicist and sculptor, Anani has built an impressive catalogue of outstanding, innovative and unique art over the past five decades, pioneering the use of local media such as leather, henna, natural dyes, papier-mâché, wood, beads and copper.

In his introduction to the book, acclaimed Palestinian poet Mourid Barghouti writes ‘The works of Nabil Anani simultaneously perform the roles of novelist, poet, historian, architect, filmaker, musician and restorer of memory.’ This book is not only an exploration of an artist, but also an exploration of Palestine. Throughout this volume, themes in Anani’s work are considered, alongside his style and progression as an artist. Contributions from leading Middle Eastern art historians Rana Anani, Lara Khaldi, Bashir Makhoul, Nada Shabout, Housni Alkhateeb Shehadeh and Tina Sherwell offer fascinating insights into Anani’s impressive body of work.

Nabil Anani in his studio in Ramallah, 2017

Born in Latroun, Palestine, in 1943, Anani graduated in Fine Art from Alexandra University, Egypt, in 1969. On his return to Palestine, he began a career as an artist and a teacher-trainer at the UN College in Ramallah. Anani held his first exhibition in Jerusalem in 1972 and has since exhibited widely in solo and group shows in Europe, North America, the Middle East, North Africa and Japan. Anani was awarded the first Palestinian National Prize for Visual Art in 1997 by Yasser Arafat and became the head of the League of Palestinian Artists in 1998. Anani played a key role in the establishment of the first International Academy of Fine Art in Palestine. In 2006, Anani was awarded the prestigious King Abdullah II Arab World Prize for Fine Art. He lives in Ramallah, Palestine.

Text from Rana Anani, ‘How Childhood Captivated an Artist’

Nabil Anani spent his key childhood years in the 1950s and 1960s in Halhul. In those days, poverty was widespread and the population was affected by the years of turmoil and political instability that pervaded Palestine. In the space of a few years the region had gone from Ottoman to British rule, and then to being governed by Jordan. The recent past, which had brought the Israeli occupation and the atrocities committed just a few miles away before, during and after the Nakba of 1948, was still fresh in their minds.

In Halhul, near the main street leading to Hebron, Nabil Anani’s greatest interest was focused on the ground floor of the house his father had built and in which he grew up. For a child of seven, the storeroom, where his father kept his tools with all their intriguing shapes, was like a cave full of treasure. The young Anani would very often sneak into the storeroom and stealthily borrow a screwdriver or a pair of pliers, which he would take into the alley where he would use them to fashion little cars made from bits of barbed wire he found in the vineyards. ‘The cars were finely detailed. I would make wheels for them that rolled, and steering wheels that moved the wheels right and left. We would clear roads for them on the ground and play with them for hours. Children came from all over the village so I would make them cars like mine.’

The other part of the ground floor consisted of a room he used as his first studio. That was the place where he kept his colours and papers, and worked on his artistic creations in plaster, sculpture and other materials and art forms. There he would spend many long hours, and there, at a later time, he was to produce his first paintings. 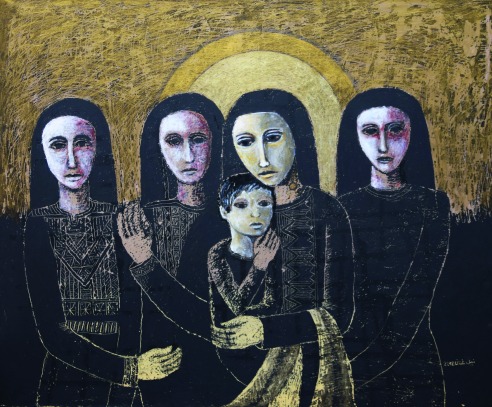 Text from Bashir Makhoul, ‘The Inability to Forget and the Promise of Memory’

In 2012 Anani began adding a new perspective to his practice and produced an important body of work: reinterpreting and reworking a series of photographs of families from around Palestine taken by among others the Palestinian photographer, Khalil Raad during the first half of the twentieth century and many of which appeared in Walid Khalidi’s collection, Before Their Diaspora. The original photographs were clearly intended as private family photographs taken for the same reasons that family snaps and portraits are still important to us: to record and remember the people we love. However, as these private archives age, their unintended public, historical importance increases. In his series Life Before 1948, Anani has produced a number of these paintings, such as Holy Family (2012), and Ayyoub Family from Safad, 1948 (2014). In these paintings, he endeavours to move beyond the conventions that he previously followed, in some ways striving to rework those images into new formal articulations relating to the conception of memory and the processes of painting. This is a new departure for Anani, through which he attempts the challenge of depicting a convention of memory as a communal recollection in such a way that something new can be revealed.

These family photographs do not belong to his family; they are in effect pictures of strangers who are also familiar. He collects them to make the people depicted his models and the subjects of his paintings, so that essentially they become familiar to him through the process of making the work. To paint somebody, to make somebody a subject of your work, is a form of relationship, and this is combined in Anani’s case with an extraordinary and abiding connection between his own life memory and the ‘studied’ memory and life contained in the photographs. Through this process they become internalised and as paintings the subjects become part of his broader memory, a memory of all Palestinian families. This is a fascinating ingredient additional to his own personal and direct experiences, and a good example of how collective identities are formed relationally.

Not only is Anani asserting a collective identity in representing these photographs as paintings, creating a relationship with these strangers in the act of transposing their images into another medium – he is also to some extent replicating the original act of the photographer. The pictures were taken to show and represent familial relationships, to commemorate the families as close social units and in order to remember these people and their relationships to one another for the sake of the future – for new members of the families who are yet to be born. By making them the subjects of his paintings, Anani is adding another twist, another form of commemoration at a broader national level, and as a private act of love for these strangers who share his history.