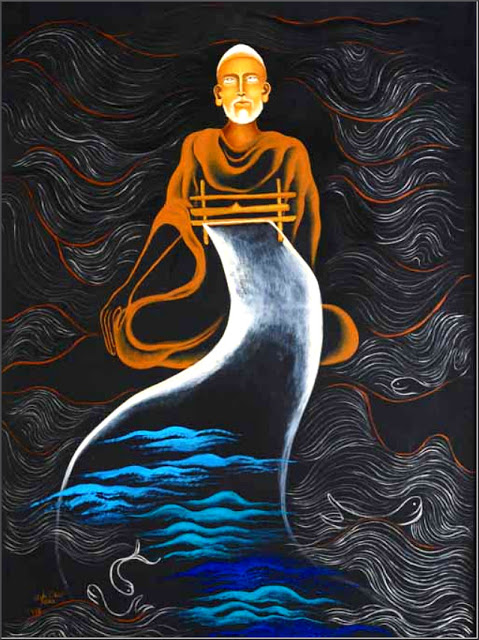 A historical judgment was passed recently. Ram Mandir is set to be built. Never before perhaps ‘Ram’ has pervaded the political, social as well as intellectual discourse as much as it has in the last few decades, and very violently so. Yet, amidst the myriad of ways of looking at Ram, the sharp, radical and awakened voices of the Bhakti and Sufi sphere are often not taken recourse to.

In this piece, I intend to explore the Ram that Kabir, the medieval poet-mystic, talks of, through one of his nirgun bhajans.

Baahar Kyun Bhatke (Why Wander Outside?)

These are the opening lines (or questions) of a nirgun bhajan that is attributed to the 15th century mystic poet Kabir. No other genre of poetry is so abound with questions as that of the bhakti poetry of the subcontinent. These questions intend to subvert, invert, intrigue, awaken, and in case of Kabir, sometimes even to poke.

I heard this particular nirguni bhajan of Kabir in the mesmeric voice of Mahesharam Ji of Jaisalmer in Rajasthan, during one of my doctoral fieldtrips. Sung in the local dialect, Baahar kyun bhatke is much alike those Kabir vani that are not strictly about social critique but more about an introspective journey into the formless within (although both the aspects are not mutually exclusive to each other).

From the moment we are born, we are conditioned to be driven primarily by the forms which lie on the realm of the outer (baahar): be it our appearance, name, caste, language or even the construction of our intellectual ideas. With respect to devotion as well, more often than not, this leads us towards an easy perception of only a sagun worship of Ram, one that is manifested in the form of an idol-image, a space, flag, and ritual and so on. But does divinity reside in the outer solely? When filmmaker-cum-singer Shabnam Virmani sings Sakal Hans me Ram Viraje (In every swan soul there resides Ram), another one of Kabir’s nirgun bhajan, she marks pertinently “Is it the Ram of Ayodha that Kabir refers to? We are amateurs who remain stuck in that image of Ram. The Ram that Kabir refers to is much more subtle, indescribable and all-encompassing.”

The baahar (outer) in the phrase baahar kyun bhatke (why wander outside?) stands as a metaphor for all things appearing in the physical world, which come under a structure. While the inner is evoked by the word hriday (heart) in this song, which stands for the un-manifested, metaphysical, structure-less world.

The following verses of the bhajan ask:

(Such gems remain etched in the pots,
But without the jeweler who will extract the gems?)

(Such pure ghee remains within the milk,
But without churning how will you get the butter?)

(Such fire remains within the wood,
But without rubbing how will you get fire?)

These verses suggest that the fire exists in the wood itself, and so does the ghee in the milk. Fundamentally the un-manifest exists within the manifest itself. When all that we search for and all that is not manifest yet, is already there present within the manifest, then why one wanders about outside, is the question in the bhajan.

There is a second part in the questions that Kabir asks in the above bhajan. The gem is etched in the pot, but who is the jeweler who will extract it? The ghee is already within the milk, but without churning will anybody get the ghee? How will we rub the fire within the wood to make it appear?  The last two verses answer them:

(Such doors remain etched in your heart,
But without Guru who will open the locks?)

(Says Kabir, listen seeker friend,
Who else but Ram will show you the path?)

In the penultimate verse we are led to the realization of the Guru that we need to open all our locked doors within, to perceive all the gems, churn the ghee, and fire the wood. Kabir finally calls out for us ‘to listen’, that it is the Ram ‘within us’ that is the ultimate Guru beyond any other and that shall unlock all these doors for us. It is the indescribable, formless divinity within every existence.

So much political and religious hullaballoo surrounds the image of Ram today, yet the uncertainty still looms, if this inner Ram that Kabir and other mystical figures talk of, is understood or awakened in many of us yet. We can fight all we want for a historical Ram, pinning him down to this space and that site. Unless we realize the formless nirgun Ram within, we shall keep falling flat on the outer mirages here and there. After all, the treasures that we seek are already there within!

Bio:
Dipanjali Deka is currently pursuing Ph.D. in the Department of Theatre and Performance Studies at the School of Arts & Aesthetics in Jawaharlal Nehru University (JNU), New Delhi. Both in research and in life, she takes pleasure in diving into the music and poetry of the Bhakti and Sufi mystics of the subcontinent.