When every nation affected by the COVID-19 pandemic is struggling to combat the deadly disease and battling to save people’s lives, many in the Indian news media are keen to give the virus a new identity, a Muslim identity. It is not a surprise as the current ongoing trend in our country revolves around the very issue of identity, rather the propaganda of identity – to certify who is a nationalist and who is an anti-national. If you forget, just recall the last four months and you will have the following hashtags – #CAA_NPR_NRC; #JMI_AMU_JNU; #Delhi_Genocide – flashing before you based on the identity question. If such is the trend, how can corona find its feet in India without having an ‘identity’? Corona entered India in late January 2020 and it had started haunting the nation by late March 2020 when a national-level emergency was declared. As the pandemic virus reached Nizamuddin Markaz in New Delhi, most of the news media rushed to associate the spread of the disease with a well-planned conspiracy – a conspiracy of Muslims to harm the country at large. Eventually, SARS-CoV-2 (Severe Acute Respiratory Syndrome Coronavirus 2) which causes a deadly disease called COVID-19 finds a suffix ‘Jihad’ added to it after reaching India. It has become Corona Jihad and a person in kurta pajama having a beard on the face and wearing a skull cap has come to be called a Corona Bomb.

The forced march of thousands of migrant labourers stranded all across the country, lack of testing facilities and a dearth of PPE kits which few days back posed the biggest challenge in battling corona, have suddenly disappeared from the TV screens and is replaced by a more thrilling and selling news, i.e. Nizamuddin Markaz, Tablighi Jamaat, Terrorism and, of course, Muslims. In an already communally charged socio-political context, what else can be the most convenient and suitable cause to justify and legitimize the dereliction other than Muslims being the most unwanted and problematic segment of the Indian demography? Day in and day out attempts are made to ensure and to prove that the spread of corona in India is solely because of New Delhi’s Markaz of Tablighi Jamaat and Muslims. This aggressive bigotry of news channel has turned virulent and, as a result, there is a hasty rise in videos and visuals amplified through social media such as Twitter, Facebook, WhatsApp trending Islamophobic hashtags – #CoronaJihad, #TablighiVirus, #BioHumanBomb – having millions of views.

Media Pitching: A propaganda for hating Muslims under the guise of corona 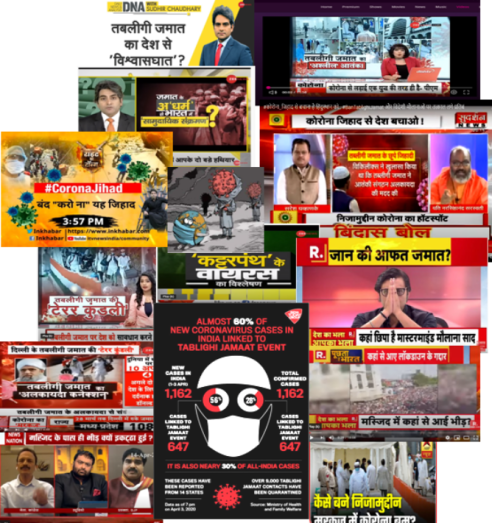 This visual reflects the effort of media to sensationalise and turn Muslims into a scapegoat. The way mainstream media houses are broadcasting news during the corona crisis, it can be inferred that a veiled propaganda has been initiated to mold public opinion and amplify extreme anger among people against Muslims, using emotionally manipulated, factually incorrect and communally coloured information. Day in and day out sensational and eye-catching headlines are aired during primetime to highlight and underline symbols of Muslim identity to theorize and legitimize the spread of the deadly virus. If we take a closer look at the screenshots of some mainstream news channels and their content, we shall find that the media have been instrumental in doing an aggressive campaign to indoctrinate communal toxicity by singling out the Tablighi Jamat Markaz and Muslims. This is done by exaggerating and twisting the news to charge Muslims for aggravating the ‘national’ crisis.

Shockingly, the attention of the common masses has now shifted from the COVID-19 pandemic to India’s Muslims. The following are some frequently circulated fake videos that were used to malign the image of the Muslim community and to mobilize fear and prejudice among masses against Muslims. The most gruesome part of this is that sometimes they are found circulating on mainstream news channels:

I wish the news anchors and journalists would do more intensive sensitization on civic sense, ownership, accountability, and compassion, on the one hand and be critical of the government’s strategy, responsiveness and modus operandi for combating COVID-19, on the other. But, unfortunately, they have not only failed in doing so but also exposed their fanatic character. To me the most alarming aspect of this whole episode is its resemblance to the anti-Semitic approach of the Nazi regime which hypothesized that Germany did not lose the World War on the battlefield, but through betrayal at the home front by Jews. In a similar fashion, the above fake and viral videos are used to whip up a radical anti-Muslim feeling in India, while labeling them as culpable coronavirus vectors putting the nation as a whole as risk! It is clearly visible that the Indian news media have taken the driver’s seat in the Indianization of anti-Semitism and Goebbels propaganda for manufacturing a larger perception about Muslims as the biggest evil and threat to the nation. The media have been trying to forge a consent that this evil should be punished and exterminated. It seems that the news anchors are competing with one another to prove who is more insidious than Joseph Goebbels, the chief of Nazi Propaganda.

In a span of merely one week after the nationwide lockdown, subconscious emotions of hate and anger against Muslims have been refreshed and resurfaced through a regressive media propaganda. The news anchors could be credited for manipulating emotions of masses by labelling Muslims with adjectives like harmful, risky, dangerous, threat, surveillance, isolation, etc. 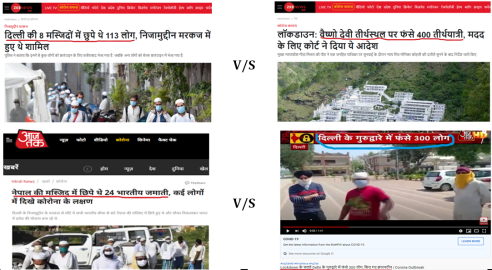 Vocabulary is weaponized by media houses as a powerful tool of meaning-making in channelizing people’s anguish against the Muslim community. This is seen in the above image. It is horrifying to see a news anchor pitching the communally charged prime time show in the language of Us vs Them binary. Here, ‘Us’ denotes the good nationalists and ‘them’ refers to the bad anti-nationals (the Muslims). His repeated use of terms ‘hiding’, ‘Islamists’, ‘hate spreaders’, etc. arouses emotions of anger among his viewers and followers. His performance in a one-hour primetime show is the perfect example of how malafide propaganda indoctrinates hate and anger of immeasurable fathom to mobilize willing executioners. Subsequently, a few days later, we have come across several frightening facts describing the outburst of anger against Muslims in the form of practicing othering. Following are some of the headlines:

These incidents are clearly the repercussions of fear and prejudice in the form of anger which has been cultivated by the news media against Muslims. These incidents of othering Muslims and brutalizing them denote that the process of mobilizing the army of willing executioners is in full swing by Indian news media houses. It is painful to see that we have completely forgotten the Nazi propaganda and its aftermath for which the whole world feels ashamed even today. History gives us a lot of lessons and we need to remember those lessons because a society that forgets these lessons certainly puts its future in the dark.

If we want to avoid being manipulated by propaganda, we need to learn to recognize it and set the agenda right. Every fifth person in India is a Muslim and the representation of each of those Muslims does not lead to Markaz of Tablighi Jamaat or the ISIS or Al Qaida. But journalists have intentionally ignored the fact and labelled one mosque as representative of all the mosques of the country and a few Jamatis as representatives of the entire Muslim community.

Due to the communal narrative of the COVID-19 pandemic, we have ignored the most vulnerable faces of voiceless people whose life at present is at the highest risk. To bring it into focus again, I just present this image so that we could connect ourselves to the other side of the reality. 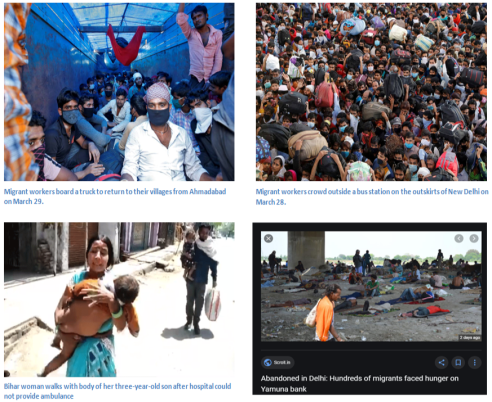 Incidents during the lockdown show that the poorest and the migrant workers are severely affected. Not only are their employment prospects ruined but also their self-esteem and dignity compromised. It is more important for us to be critical and engage in raising alarm affecting the lives of migrant workers and the vulnerable social groups who deserve their rights and justice. I would also request that we pay attention to the unattended plight of women-headed families, sex workers, persons with HIV, street children, persons with disabilities during this crisis. I think these issues deserve to be given sufficient and substantive space and energy in primetime so that the plight of the poor may be addressed and effective governance may be ensured.