On December 15, 2019, the Delhi Police lathi-charged students and fired tear gas shells at the Jamia Millia Islamia, a central university in New Delhi. The police personnel entered the central library hall and assaulted students and teachers studying there. Students and civil society organizations across Delhi came out to protest against the brutal attack unleashed on the academic community. The Jamia attack was just a reiteration of several such acts of violence committed by security forces in universities across India.

Artists and students of Jamia protested the police crackdown by painting the walls of the university campus. The various artworks range from depiction of the quest for freedom of speech to condemnation of police brutality, state oppression and internet shutdown. They raise awareness regarding the recent Australian bushfires or express solidarity with Aishe Ghosh, the president of the Jawaharlal Nehru University Students’ Union, who was attacked by goons on campus in January this year. One also sees depiction of popular dissenters including Bhim Army founder Chandrashekhar Azad and RTI activist Akhil Gogoi. 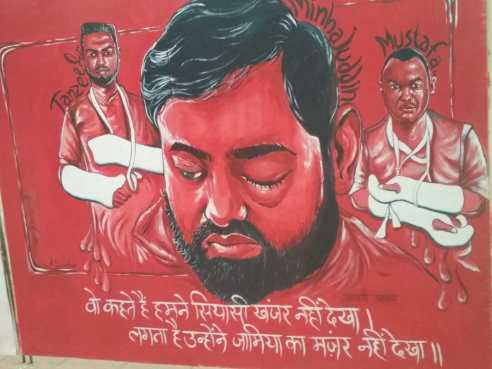 India has in the past few years witnessed a series of protests from various sections of the society including gender and human rights activists, students and civil society members. Creative arts such as music, wall graffiti, literature, and street art often serve as a medium for the oppressed to voice their dissent against the establishment. At the Jawaharlal Nehru University (JNU), graffiti culture and wall art have had a long history as they are often considered parts of the learning process. Students at the university speak of having been introduced to the revolutionary poems of several poets including Vaidyanath Mishra (Nagarjun), Ramashankar Yadav (Vidrohi) and others through JNU’s wall art.

However, the wall art tradition is taking a downward turn at JNU, where the university administration has begun to remove the posters to distract and discourage student agitation. This has led to a confrontation between the administration and the students. Along with fee hike and curtailing freedom of speech, the freedom to practice wall art remains a major bone of contention at the university.

Similarly, in the anti-CAA/NRC protests, citizens have come out with posters and artwork voicing their resistance against the state. There is an array of street art at Shaheen Bagh, a prominent protest site in Delhi, that depicts the exclusion of Muslims in India as unconstitutional and unjust. There are slogans on the walls, on the roads, posters in and around the library that depict resistance in myriad ways.

Similarly, at Jamia Millia Islamia, street art not only becomes a tool for protest but also a message as to how a university should function and act when it is under constant state repression. This peaceful mode of resistance also depicts the significance of poetry and revolutionary ideas, something the state machinery finds extremely terrifying despite the poetry and the ideas being devoid of violence or immediate threat. 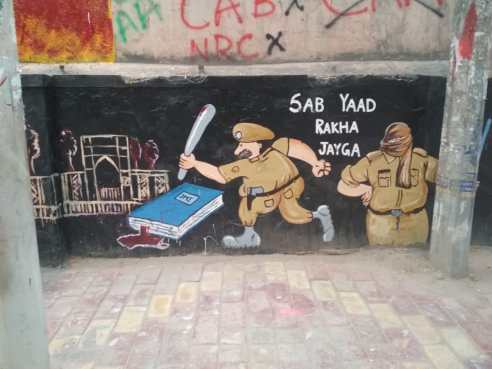 Throughout history, art has remained the best form for recording turbulent times. Many of us are familiar with the image of two Communist dictators, Leonid Brezhnev and Erich Honecker, kissing on the Berlin Wall. This image remains one of the most popular wall graffitis. Wall graffiti dates back to almost 13000-9,000 BCE, much before written language was created, and is found on the walls of Cueva de las Manos or Series of Caves in Argentina. Today, Bansky, an anonymous artist, has become synonymous with street art. The artwork named ‘Rage, Flower Thrower’ is located on street walls in Bethlehem. The picture is a depiction of a young man, with his face partly covered in a bandana, throwing a bunch of flowers. The image represents Bansky’s advocacy of peace instead of war and violence.

Given the nature of student protests in Delhi, it is safe to assume that most students are concerned with the future of public universities and the violent tactics adopted by the state against those who dare to resist. The state, however, has been hostile to any student movement and artistic expressions associated with it. It is obvious that the state is insecure about dissenting voices so much that any mention of atrocities against minorities or the mention of Kashmir is bound to evoke a violent response.

There are several ways to read and comprehend protest literature, but an important question that remains at the bottom of it all is: Why does art terrify the state and ultranationalists so much that India witnessed the cleansing of street art at Shaheen Bagh and Jamia Millia Islamia, while the world is bothered about the coronavirus pandemic? The answer is crystal clear: artistic expressions challenge the status quo and encourage people to ask difficult questions to authorities. And that exactly is what the authorities fear. As Gorakh Pandey wrote in his poem Woh darte hain, “They are scared despite having arms, ammunition and army at their disposal because poor and unarmed people will stop fearing them.”

Bio:
Sharonee Dasgupta and Fathima M are freelance writers based in New Delhi.