Recently I had the opportunity to listen to Nobel Laureate Leymah Gbowee at Teachers College, Columbia University. She is currently located at Barnard College (Columbia University) as Barnard Center for Research on Women Transnational Fellow. Leymah is a Liberian peace activist and the leader of the women’s movement which ended Liberia’s second civil war in 2003.  She was at Teachers College to deliver the keynote address for the Sustaining Peace: Interdisciplinary Perspectives conference.

I first heard of Leymah and the women’s movement through a course on Human and Social Dimensions of Peace offered by Dr. Monisha Bajaj at Teachers College. One of our assignments was to watch, discuss, and write a review of the film Pray the Devil Back to Hell (2008). Directed by the documentary film maker, Gini Reticker, Pray the Devil Back to Hell, is the story of the Liberian Civil War (1989-2003), its actors, its impact on the society, the efforts for peace, and the culmination of the war as told by those who led the Liberian women in their victorious Fight for Peace.

The women and children of Liberia had become ‘collateral damage’ in the fight between a power hungry President, Charles Taylor and the Rebels, who were fighting, presumably, to end Taylor’s autocratic regime. But as the women soon realized these rebel leaders or war lords were not there to ‘save’ them or their children. Rather, they were fighting their own battles for power and wealth. The war and the hunger, pain, fear it was generating was eating away families. As the war advanced towards Monrovia, the capital city, Leymah Gbowee had a dream in which she heard the call for organizing the women of her church to work towards putting an end to war. Like Joan of Arc, she followed her dream and helped launch the Christian Women’s Peace Initiative. The Christian women, however, soon realized that organizing themselves on religious terms in the face of a national calamity would amount to undermining peace efforts. They, thus, reached out to their Muslim sisters and together they began the Fight for Peace that was to play a decisive role in bringing the civil war to its knees.

Partnership was a theme that Leymah constantly reiterated during her keynote address. She talked about the challenges of forging these partnerships in the face of age-old stereotypes, misconceptions, and the bitterness caused by war. Forging partnerships are not easy but establishing a common goal made the process possible. Even before 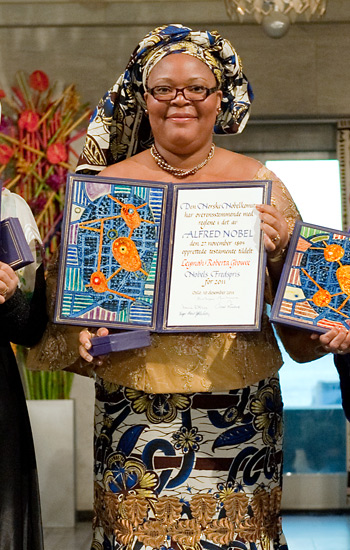 they went out to the streets, Christian Women’s Peace Initiative realized the importance of numbers and the need to form alliances. For the first time in the history of their country, the Christian and Muslim women came together, putting aside their religious differences. This alliance reminded me of the native Hawaiian feminist Hunani Kay Trask’s notion of ‘temporary and issue oriented’ coalitions. In the case of Liberia, the alliance proved powerful because the Christian and Muslim women were not bringing their separate agendas to the table but rather were united behind a common cause—the need for peace.

While they anticipated potential problems of such inter-religious work, they recognized the need to come together for this common cause because a bullet, after all, ‘does not pick and choose.’ One of the decisions made by the women in their fight was reminiscent of the decisions taken by leaders of Civil Rights Movement in the United States. In the film that accompanied the book A Force More Powerful, the pastor, who initiated and led the movement in Nashville, makes two important decisions. During the marches all the protestors will be well-dressed, thus glossing over the class issue, and, secondly, a white protestor will not walk in the company of a black woman protestor and vice versa, thereby sidelining the inter-racial issue. Similarly, in the case of the Liberian Fight for Peace, the women make an explicit choice: ‘we will not talk about politics but will stick to the issue of peace.’ Thus, certain struggles are sidelined for the ‘greater cause.’ This, however, also means that certain shards of glass remain lodged in the skin of the nation. For instance, in the United States, the color line continues to be predominantly a class line.

It must have taken the Liberian women immense courage to go out and assemble daily in the open fish market, knowing full well that they might be killed either deliberately or by stray bullets. As I watched the film, I could not help but ask, ‘Would I have done such a thing?’ Philosopher Maxine Greene, who was greatly moved by the Egyptian Revolution, often raised a similar question in her class which I attended, ‘Would I have gone out there?’ What needs to happen for a person or a people to stop fearing for their life and go ‘out there’? What limits do we need to reach so that we no longer fear for our lives? The women in the film were plagued by fear, pain, and anger. They were, however, brought to the streets not only by what they were undergoing themselves, but by the hunger and fear experienced by their children. They were seeing their children being stolen by the war right before their eyes; many had died while others were being recruited as soldiers.  The women’s decision to withhold sex from their husbands for their complicity in the war was an equally startling, but at the same time, potentially dangerous, strategy. These women could have been physically abused for their decision but that did not deter them.

The story of the Liberian women can be a powerful tool in the hands of third world feminists. Third world women, in the dominant discourse, are often portrayed as voiceless and powerless. For instance, saving brown women from brown men continues to be powerfully embedded in the decisions related to US-led military interventions in Islamic countries.  Similarly development discourses often ignore local resistance movements by women and assume the necessity of ‘foreign experts’ and NGOs in even having to tell these women that they are being oppressed.

In the case of Liberia, the process of disarmament, which took place under the auspices of the UN peace keeping force, revealed one such instance of the lack of faith in local knowledge, ideas, and strategies. Women’s attempt to be a part of the process of disarmament was initially rejected by the UN forces, which assumed the role of experts. But the UN efforts backfired and led, instead, to an eruption of tensions.  Only then were women allowed to intervene. Their dealings with the young soldiers, despite their own losses and personal battles with un-forgiveness, were based on an ethics of care. When required they talked to these child soldiers on a one-on-one basis reassuring them of their place in the community. Some of these young men even made the choice to disarm for these women.

The efforts of the Liberian women and their strategies were home-grown. When asked what advice she might have for the Syrian women, she is slated to meet soon, Leymah reiterated the importance of resistance to be led by the women of the country and for them to come together under a common agenda they can agree upon. However, in the case of Liberia, one must not also forget the role played by the international community urging Taylor and the rebels to hold peace talks and the international community’s decision to withhold funds to Liberia in strengthening the women and emboldening them in their fight for peace. A similar but larger role was played by international communities in ending the apartheid regime in South Africa.

The Civil War in Liberia might have ended but its after-effects are far from over. As the women in the film and Leymah in her address pointed out, ‘peace is not an event but a process.’ The trauma and un-forgiveness have left deep wounds but these women and the larger community realize that the only way towards healing and transforming the society is in the recognition that these erstwhile child soldiers are as much victims as the women and their innocent children. Reintegrating these child soldiers into Liberian society remains a big challenge to this day, one which is often sidelined in the face of more ‘immediate’ needs.

[Mary Ann Chacko is a doctoral student in the Department of Curriculum and Teaching at Teachers College, Columbia University. Her dissertation examines the Student Police Cadet program implemented in government schools across Kerala, India with a focus on adolescent citizenship and school-community relations. Read more of her work on her blog, Chintavishta.]