By Bhupinder Singh and Bhaswati Ghosh

Cuba, and not Mexico, should have been the first Latin American country I visited. In my youthful years, Fidel Castro and Che Guevara held a special place in my mind.

Mexico came to me much later — in the murals of Diego Rivera, the paintings of Frida Kahlo, the magical realism of Juan Rulfo and other writers like Rosario Castellanos, Carlos Fuentes and Mariano Azuela. It was the country that had provided refuge to the leader of the Russian Revolution, Leon Trotsky, the Indian communist and radical humanist, M.N. Roy, and later to Gabriel Garcia Marquez and Roberto Bolaño, among others. Mexico, therefore, held the promise of an exotic land that found a resonance in my literary and political imagination. It seemed like a welcoming home for those who were hunted and ostracized in their own countries. 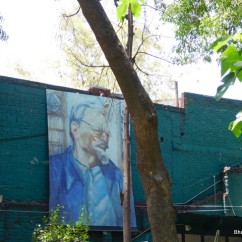 The decision to make a trip to Mexico during the long Canadian winters when ‘snowbirds’ make short trips to warmer lands in the Caribbean was intuitive. What wasn’t as intuitive was our choice of destination. Much to the surprise of friends and colleagues accustomed to take vacations at beach resorts, we decided to travel to Mexico City. A few lessons in rudimentary Spanish provided me with enough confidence to take the plunge. TripAdvisor provided a good enough idea of the key sights to see.

It was with trepidation and expectation that we landed in Mexico City in the afternoon on Good Friday. The weather was perfect for our sun-parched eyes. The drive from the airport to the hotel reminded me of cities in India — New Delhi, Chennai — and also of how much at home I had felt on my trip to Tokyo. Being a holiday, the shops were closed and the traffic was relatively easy. The bright colours — green, orange reminded me of Chennai, the wide roads of parts of New Delhi and the easy walk of the pedestrians, in contrast to the near-military gait of the Western people, reminded me of Tokyo.

I’ve come to the City expecting to see a riot of colours — bold reds, blues, greens and yellows. Yet, the colour that holds me in a dreamy sway all through my stay turns out to be purple. From the time we land in Mexico City on a warm Friday afternoon, the sky appears canopied on all sides with jacarandas in bloom. I instantly know what love is. It is to be in an entirely new place and not feel like even a traveler, much less a tourist. 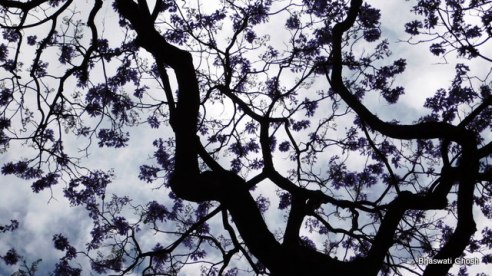 This is home, right from the get go. In the sun’s rays warming the skin. In the brightly-painted houses. In the street-side kiosks selling everything from cut fruits to clothing, tapioca chips, lottery tickets, trinkets and magazines. In the boisterous swarm of locals living it up — walking, singing, displaying affection on public boulevards heady with hawkers, street music, the alluring smell of meat being fried for tacos. And in being serenaded by couples, suddenly getting up from their benches to dance to music in a public park in the middle of a weekend afternoon.

A blend of the exotic and the familiar: Bhupinder

As we settled down in the hotel room, drinking only bottled water, hunger struck. A five-minute walk brought us to a Chinese takeaway called, Take a Wok. Our first encounter with Mexican food turned out to be what is locally called Mexchi — Chinese food with Mexican characteristics — think egg fried rice with jalapeño salsa. The menu was in Spanish and after some exchanges in English, which the woman at the counter did not understand at all, and me, who understood little more than uno, dos and tres in Spanish, we had our first lunch sitting outside in the sun. It could have been a little alley in one of the better neighbourhoods of Delhi, just a lot cleaner and quieter.

Mexican food, unlike what passes for Mexican food outside the country excited the taste buds. The hot salsas with generous amounts of tomatoes and hot peppers brought to the mouth memories of Indian food. Eating tacos and freshly-cut mango chunks at roadside kiosks was the best of both worlds — exotic yet being at home.

Of feasts and plots: Bhaswati

It’s our first day in the city and we’re eager to eat Mexican food the way Mexicans do. We head out to scour the area near our hotel in search for grub. Most shops are closed as it’s Good Friday, but five minutes of walking later, we are in front of Take a Wok, a small take-out place that’s open. It smells of Chinese food, but we’re desperate and get in. The menu is in Spanish, which I know not a word of. My husband knows a little, but not enough to figure out the menu. After a frustrating attempt to understand what means what, I take the menu card the lady at the cash counter has handed me and move towards the ingredient trays behind a glass counter. I point to something on the menu sheet and gesture the lady to show me the actual thing. And so I learn chicken is pollo, pineapple is piña, corn is maiz and jalapeño is, well, jalapeño.

The outlet is modeled on fast food places that let you build your own meal, with choices of different vegetables and meats alongside rice or noodles. The interesting twist is in the salsa with which all the ingredients are to be smeared — that’s the Mexican part of the Mexchi meal we’re about to have. We order a chicken-pineapple-corn rice with broccoli and cauliflowers in jalapeño salsa. As the food cooks, we sit outside, watching people walk by. The sun’s still bright, but the green foliage all around keeps the air cool. There are moments when I forget I’m not sitting in Delhi. Soon, the food arrives in Chinese take-out boxes. One bite and the love with the City is reaffirmed. The Chinese part is all there — in the fried egg and garlic and the crunch of stir-fried vegetables, but what explodes in my mouth is the tang and heat of the jalapeño salsa. 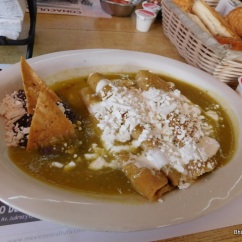 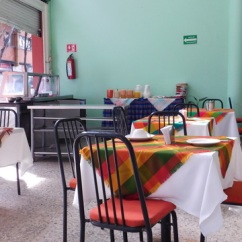 Most food we eat here is simple, made with fresh ingredients and enjoyed leisurely. From breakfasts of enchiladas with Mexican cheese in salsa verde alongside coffee and fresh fruit juice to quesadillas and taco samplers for lunch to tacos or a side of rice with a huge poblano pepper stuffed with potatoes and tuna for dinner, food in Mexico City seldom disappoints. Mole sauce refuses to agree with the palate of the unaccustomed but Agua Jamaica (hibiscus tea with ice and chia seeds) more than does.

My best food memories of the City aren’t any of the bigger meals but of the times spent enjoying  luxuriously laid back brunches in La Cafe Habana, an expansive cafe that invariably reminds me of Calcutta’s Indian Coffee House.

The similarity extends beyond the atmosphere, to the reputation the two places enjoy. As with the Coffee House, a hotbed for artists, writers, poets and filmmakers to sit in adda over coffee and smoke, La Cafe Habana saw many a celebrated Latin American personality not only sit in its precincts but even hatch serious plots. This was the cafe where Fidel Castro and Che Guevara met several times, chain smoking and drinking strong coffee, to plan the Cuban Revolution. As I enjoy eggs and hams with refried beans and look at old men being humoured by the cafe staff, I try to imagine those intoxicating times.

The past as a present: Bhupinder

Over the next one week or so, the feeling of Mexico being at once an exotic place and home continued to co-exist. Seeing Diego Rivera’s murals at the National Palace; walking through Frida Kahlo’s blue house, now a museum; taking a picture next to Trotsky’s tomb were among the most exhilarating moments for me. I felt like I was entering spaces I had already visited in my imagination. Roadside kiosks selling nuts and cookies, negotiating the price of a taxi ride or crossing the road when there were no traffic lights reminded me of India.

There was the usual surprise that one expects of any new place — Zocalo, the city’s centre; the cobbled streets in the old historic district; even the little art shops that appeared with an unsurprising regularity.

A mural by Diego Rivera at the National Palace

Nevertheless, there were quite a few surprises. Considering that Mexico is part of what is called the Third World and Mexico City, a megacity with a population of 10 million, brings up images of a smog and pollution-riddled city, traffic clogging its roads. Contrary to these images, we found that there was hardly any air pollution. The traffic during peak hours was slow but organized and sans any of the road rage that one sees on Indian roads. There was a little honking, but way less than in Toronto or New York. The people are easy-going and much less given to aggressive behaviour. On the contrary, they are quite expressive in showing their affections to their partners and children.

The roads, at least in the central districts of the Ciudad that we mostly confined ourselves to, were wide and the metro system, world class. We used the inexpensive and very efficient metro for most of our travel within the city. The taxi fares were not expensive, but the taxis were also slower during peak traffic hours.

Bio:
Bhaswati Ghosh writes and translates fiction and non-fiction. She is an Editor-at-Large at Cafe Dissensus. Her website is bhaswatighosh.com.