It is easy not to know where it is; most people in Kolkata are unaware of it. The Eastern Metropolitan Bypass, a major arterial road in Kolkata, runs close to it. There are people who travel by this road but are unaware that off this road, tucked away behind trees, is a huge water-body. This lake is called, Subash Sarobar and is located in Beleghata. Most people have heard of or visited the Dhakuria lakes. People know of Rabindra Sarobar – an oasis in South Kolkata, a wonderful place for morning walks, home to a swimming club, and some rowing clubs, too. Subhash Sarobar might be called its North Kolkata equivalent, of course with some differences.

Located amid huge trees and foliage, off the Eastern Metropolitan Bypass, this 73 acre lake is home to several species of trees. The lake and its surroundings are, however, in a complete mess – there is garbage and litter all over, bottles floating in the waters of the lake, and clutter all around. What could have been a place of peace and quiet in the midst of the hustle and bustle of the city appear chaotic. As one approaches the lake from Beleghata, a residential locality in Kolkata, one finds a thick green cover surrounding the lake and its vicinity. There is the Children’s Park just before one enters the lake. This park is huge, surrounded with tall trees and a lovely path encircling it, and a building in a state of neglect. It is clear that there has been  no effort at maintaining the park, as the patches of green are all in disarray, weeds and plants growing wild all around. Just opposite this park is the Subhash Sarovar Swimming Pool, which is in a much better state. The Diving Pool of the Sea Explorers Institute lies next to the park.

It was late afternoon as we walked in. We saw a cricket match in progress and a cricket training camp on the park, too. We, city folks, who were unused now to seeing such huge open spaces, the view of the playground was a sheer delight. We found a smaller ground right opposite this big playground, where local children were engrossed in a football match. On the bench at the side, a group of people were playing a game of cards and a man was sleeping on another bench. The quietness of the place added a sense of languidness. In the absence of any traffic, the road around the park seemed to be an ideal place for young women to learn to ride two wheelers.

The small ground is flanked by a hillock with a winding path that leads to a small temple on its top. Wild foliage covers much of the path. The entire place seemed to be popular with people out for a drink, as we saw empty bottles strewn all over the place. We even saw some people drinking.

The local people use the lake for their daily chores – washing, cleaning, and bathing. The path around the lake is nicely paved. There are benches all around and a couple of gazebos in bad shape. We could hear birds chirping. I was told that migratory birds used to flock to the lake in winters earlier. However, their numbers have drastically reduced due to pollution in the area.

As we walk down the path, we notice a number of people sitting patiently by the side of the lake with fishing rods in the water. The fish in the lake has reduced, too, over the years. We were told that one needed to buy a ticket for a fee to   fish here. We did not see any catch while on our walk there. 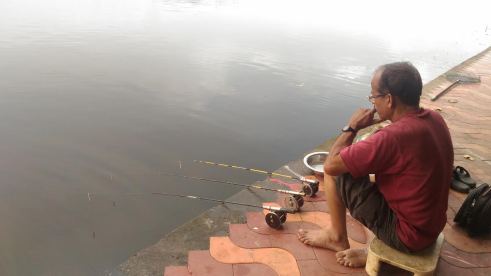 In the middle of the lake, there are two islands. An old timer in the area remembers sailing down to those islands by boats for a fee. The boat service is no longer available. The two islands have also grown wild with thick vegetation. As one looks across, one can see the construction for the Metro service on the other side. It is because of this construction work that the lake and its vicinity have been further littered.

As we sit by the lake, we experience a sense of quiet and calm. The din of the vehicles whizzing by the Bypass is not audible here. It seems like an oasis, a lung of the city that would have worked wonderfully with some maintenance. The litter, the empty bottles, the wild growth, and the lack of any care mar the place. One wishes that the authorities would improve the place because it could turn out to be a lifeline for the city. I was told that the place was once maintained well. The water of the lake was clean, the green foliage trimmed, and the flowers were in full bloom. Maybe things would change for the better here, some day. 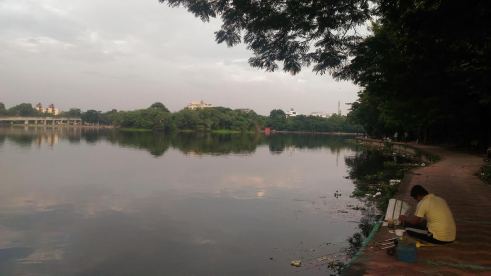 Bio:
Dr. Nishi Pulugurtha is Associate Professor, Department of English, Brahmananda Keshab Chandra College, Kolkata. She is an academic with varied interests and writes on travel, too. Twitter: @nishipulu