In India, it would not be an exaggeration to say that the news of a rape no longer shocks the population. This is a country which, according to the official record, reported more than 34,000 cases of rape last year, and a further 4,000 cases of attempted rape. This is not a law and order situation; it is an epidemic, with no solutions in sight.

A deeper look into the issue also highlights how insensitive our political leaders can be, and have been, while commenting on such a grave social evil. The apologists of rape will go to any length to almost defend it; tongue-in-cheek, of course. The latest addition to this list is Milli Gazette, a newspaper published from Delhi, which calls itself ‘Indian Muslims’ Leading Newspaper’. 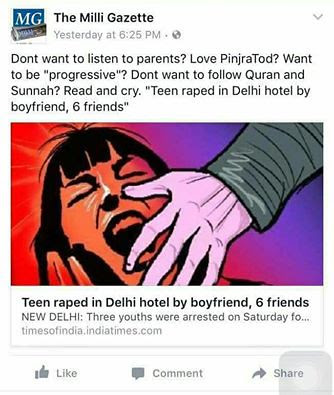 A few days ago, the newspaper, while sharing a Times of India report of the rape of an underage girl, said the following:

Mind you, this was not even a report published by the newspaper. The newspaper was merely sharing an article and chose to use such condemnable words regarding the rape of an underage girl.

This is not the first time the media has stooped down to such levels. Many media outlets do get carried away and print patriarchal stuff. But for Milli Gazette, which projects itself as the voice of the Muslim community, to do so is extremely disturbing. A news portal, apart from just printing news, also plays a vital role in framing societal trends and rules. Newspapers/portals have for long tried to bring positive change to the society. Be it political or social issues, they have been instrumental in bringing reforms. Sadly now, most media outlets have been reduced to being mere mouthpieces of various governments. However, their role can’t be ignored.

And, pray, what does a movement like Pinjra Tod have to do with rape? If you look at their page, you see that it is, in essence, “a collective effort by women students and alumni across colleges and hostels in Delhi, that seeks to discuss, debate, share, mobilise and collectivise struggles against restrictive and regressive hostel regulations and moral policing by hostel authorities.” In the last one year, this movement has also been targeted by right-wing goons of the ABVP for these very reasons.

Where does this leave the politics of MG, then?

The Muslim community is not only facing a lot of changes and challenges, it is also burdened by its past.

Many issues, especially concerning women, which were previously brushed under the carpet, are now in the limelight. At this critical stage, a news portal should be a means of subtly guiding people towards a just and fair society. But sadly, the people at Milli Gazette are trying to push a regressive ideology, wherein the victim is blamed for her rape. In the name of honor, the portal seems to be indirectly justifying the act.

The fact that even after putting out that post and being heavily criticised by a number of its readers and others, they remain unapologetic. This is their comment on the post: “Everyone one should follow the Quran and Hadith. We ask boys and girls together. Feminazis can’t force us to focus only on boys.” It shows that before even a debate began, they had categorised the critics as Feminazis. Really? Does questioning the concept of blaming the victim for the rape make you a person who thinks on the lines of Hitler?

The worse part was that they received support from various people in the name of religion and culture . Which part of religion/culture encourages the heinous act of rape? When one uses one’s faith to justify the headline, do people realise that they are causing more harm to their faith ?

Blaming people and calling them names will not change the fact that the headline was highly misogynistic and anti-women.

Regarding warning children about the dangers of society, there are better ways of doing it than using the trauma of a rape victim. What Milli Gazette did only reinforced the idea that it is okay to punish girls/women by the most horrific way possible. What these people forget is that they are promoting ideas that are anti-women in the pursuit of a perfect society. They are putting all the blame on the female and giving the men an absolute clean chit.

Girls are blamed but what about the boys who dared to indulge in the heinous crime of rape? There seems to be no advice or warning for them. The act of not blaming boys gives them their sense of entitlement. This is a disturbing mentality and, if people are promoting this in the name of religion and culture, they need to be called out. By publishing the headline, Milli Gazette has only added to misogynistic attitude of people. The least that a media house can do is to refrain from being patriarchal. Or is this too much to expect from them?

A news portal like MG that has a huge reach among the Muslim youth needs to be more responsible and restrain from promoting regressive ideologies. Whatever the reason, it is never right to blame the victim for the crime. Is this too much for the learned to understand? If Milli Gazette can’t help the women, the least it can do is stop promoting anti-women ideas.

The article first appeared on TwoCircles.net