India is a multicultural society with different religions, cultural backgrounds inherited traditions, various ethnic affiliations, and multiple languages. People are diffracted over caste, class, and gender and other unchosen identities. Now let me be honest enough to raise a question here. How much of this diversity is actually respected and celebrated rather than merely ‘tolerated’ in the name of secularism? Much of these cultural and religious differences are today reduced to mere forms of prejudice and hatred in our public sphere. An important way to capture this debate is to see how our society sees inter religious and inter caste marriages.

Our religious and cultural identities surely are extremely important to us but what is equally true is the fact that these identities bear in them potential traits of becoming dogmatic and hierarchical, eventually marginalizing the other identities. Challenging such dogmas therefore adds richness to our given identities. Inter religious and caste marriages are one way of breaking such social prejudices and forms of discriminations. Such marriages therefore become a potential form of expressing dissent where love is not just an emotion between two individuals but is also seen as one way of bringing social change.

A big initiative in this direction is Dhanak, a medium where young couples, who are threatened for marrying beyond religion, take recourse. The movement was started by Asif Iqbal and Ranu Kulshreshtha after the problems they faced in their marriage. SAHAS, which is Dhanak’s annual gathering, works tirelessly to ensure that the individuals have the right to choose their life partner, without any fear. The initiative, which started in 2005, has today organized 600 marriages. Initiatives like SAHAS are important today because the issue of inter faith and inter caste marriages they have taken up is one, which is not considered ‘normal’ in our social spaces. However, Dhanak maintains that more than religion, caste, and language, such marriages are condemned because they are an act of choice.

Coming to the legal and institutional support structure, the constitution provides the ‘secular’ Special Marriages Act, 1954. The Act recognizes inter faith and caste marriages. However, these measures are practically inadequate. First, there are procedural challenges in the Act, where the notice period is too long.  After knowing that the two individuals want to get married by mutual consent, the 30-day notice period carries no meaning. In fact, this interim period allows the fundamentalist organizations to communalize the entire issue. Second, the marriage officers too are no less  a moral brigade in India. When you actually go to register your marriage, the marriage officer would ask if the letter has been sent to the couple’s parents. In many cases the marriage registrars would offer you unsolicited advice to marry in your own religion or caste saying, “Aise shaadi dangay karwa degi”, thereby criminalizing such marriages and the eventual idea of loving beyond religion or caste. So as far as the legal route to such marriages is concerned, the implementation has been made so complicated that procedurally there is nothing ‘secular’ and ‘democratic’ about the Act. Eventually many individuals in such marriages end up in faith-conversions to keep the marriage hassle-free.

Another important issue, which needs to be addressed here, is the politicization of such marriages. The BJP rally for 2017 UP elections mentioned setting up vigilante groups like ‘Anti Romeo Squads’, especially against the cases of Love Jihad. The political parties seem to be rallying not just against such marriages but also against the very idea of love beyond religion. The reason behind capitalization of such issues is the sheer dislike for the idea of love beyond religion and the eventual glorification  of their ‘religion’ and their ‘sankriti/tehzeeb’ as the only righteous one. Another reason behind such campaigns is the simple fact that the idea of love and respect between Hindus and Muslims would grossly cut their vote banks, which works on polarization of the two communities. However, such campaigns need to be countered by opening up this issue in the public space. One such effort has been made by Love Commandos, a Delhi based voluntary organization. Sanjay Sachdev, chairman of the organization, calls arranged marriages a Jugaadu Shaadi or Intizaamia Shaadi. Speaking for the protection of lovers’ rights, he highlights the urgent need of a dialogue on such issues in our society.

I began the essay by mentioning the legal loopholes, along with the politics played in the name of love. However, the most important section of society, which challenges the idea of such marriages and therefore jeopardizes the space every time love as an emotion is evoked, is family. One of the biggest challenges in such marriages is to convince one’s parents. An upper caste boy, who married a girl from lower caste, says, “I was mocked by my relatives for marrying a lower caste girl. My father told me, ‘Pyaar apni marzi se karlia, par shaadi humari marzi se hogi’.” The lower caste girl, however, feels that by dint of her lower position in the society, she becomes the default carrier of honor. However, both of them believe that the families oppose not just because there is a caste issue involved but also because it’s an issue of their ‘children’ exercising choice. In many cases, there is no issue of religion or caste involved; it’s just the sheer idea of a girl exercising her choice, which becomes a source of humiliation for the family. A recent survey carried by Huffington shows that only 5% of women in India have the control over choosing their husbands, highlighting the arranged nature of marriages. The survey further claims that the limitation on woman’s mobility is because of the pre set social norms more than the literacy level amongst women. What we also need to understand is the fact that inter faith and inter caste marriages face a vehement opposition from society also because they go a great deal further in upturning the social structures by questioning social hierarchies of caste, class, religion, and color. 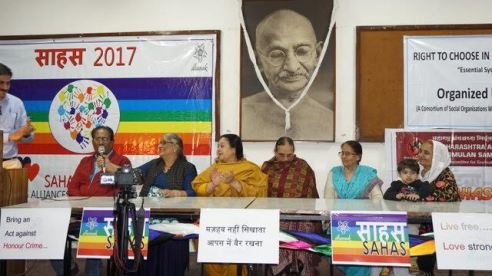 Apoorva Anand, professor at Delhi University, who is actively involved with campaigns of inter faith marriages, says that in most of the cases it’s the ‘fear’ of the other religion which prevents the family from accepting such marriages. Such fear comes from the lack of engagement with the heterogeneous spaces. Other religions and cultures are often seen as a potential threat. This is where the idea of diversity in India turns to a mere rhetoric. A lot of this debate on diversity today exists merely in form, while the content doesn’t seem to be holding much.

Apart from the fear of the other, there is another variant of fear operating in such issues. This is the societal fear. Shaheena Tabassum, who is a professor from Delhi, expressed a similar fear when her son told her that he was getting married to a Hindu girl. She says, “We had a lot to fear from people…people we had never seen or known. Fear of incidents where people murdered couples only on the pretext that two people from different religions decided to marry.”

This raises a harder question. Our families do care about love but what they care more about is society, which the individual is not supposed to override. The individual eventually becomes a means for reinforcing the established societal patterns. Is the society not then deploying religion, community, class, etc. to turn us into conformists? This is precisely the lurking danger of lack of engagement with the ‘other’, the inherent idea of which comes from the fact that their religion or their community is the ‘right’ one.

Submission to the society on the pretext of fear or honor brings out the vexed relationship of honor and love.  This brings forth a crucial debate on Honor Killings. In many cases the act of a girl exercising her choice in choosing a partner insults the honor of the girl’s community. Such honor is often evoked by the community in the morally-charged language of shame and stigma; by loving someone, the girl brings such shame to the family in particular and community in general. The very act of love becomes an immoral act and her doing so is seen as a big comment on the morality of the community. Shame and stigma involved in the entire process are so painful for the family that they gather a power strong enough to fracture the idea of familial love and the entire issue becomes an issue of humiliation, disrespect, and community anger.

A key example in this case is the murder of Nitish Katara, a 25-year-old business executive, battered to death by a hammer and later set on fire by Vikas Yadav, who poured diesel on him. The reason behind the murder was that Nitish was in love with Bharti Yadav, Vikas’s sister. The murder was a clear case of honor killing. Neelam Katara, Nitish’s mother who fought the case in Supreme Court of India, says, “Killing in the name of honor has nothing to do with honor. However it has a lot to do with control.” Emphasizing a pressing need for law on honor killing, she further says that the issue of honor killing has to be dealt not only at the societal level but also on the legal front. She adds, “When the judges of the Supreme Court don’t know what an honor killing is, what do we expect from the police and the society?”

Honor killing, unlike passion crimes, is a pre-planned act involving a conspiracy. The reason put forth is that the idea of a girl exercising her choice-freedom to decide who she marries is an embarrassment for the family. Their idea of a moral, dutiful, self controlled, emotionally-neutral woman gets punctured the moment the woman expresses the simple fact that like them (men) she also is endowed with emotion  and is not apologetic  about it. So the very idea of expression of love is seen as deviance from the ‘normal’ and, therefore, an insult to the family and community. Such killings therefore cannot be dealt just legally as it involves a broad consensus of society and even the police (which again is part of the same society). Sheeba Aslam Fehmi, an Islamic feminist scholar, says, “Nobody gives a witness in honor killings because the entire village including the police believe the act is immoral and therefore approve it silently.” Calling such marriages as ‘Samaj Sudhaar’ programs, she further says, “Inter faith and inter caste marriages will go a long way in checking the prejudices of caste, class, religion, color, etc. because women no more will be judged by dead traditions.”

The central concern for raising these issues is to bring forth a simple fact: there is nothing immoral about love. The very idea of loving beyond the traditionally set parameters of caste, religion, class or color is liberating, not humiliating for us. In fact, what is humiliating is the idea of constraining one’s emotions under the garb of societal honor; what is insulting is the exercise of societal control over someone’s choice. That being said, let me clarify an important point. Nowhere have I intended to say that all individuals of a society must think alike on an issue. In fact, there can be multiple opinions on an issue – some people agree, some would just engage, while many others may reject our ideas. However, what this should not lead to is curbing the critical freedom of others to decide and choose. We cannot achieve justice without understanding and allowing social space for love and the emotions that come with it.

Bio:
Urba Malik is a PhD Scholar at the Centre for Political Studies at Jawaharlal Nehru University. She is political editor at Café Dissensus.

One Response to ““Why Love matters for Justice””