To behave well with neighbors is an integral part of belief in God, which if practiced may help reduce sectarian friction among Muslims, at least.

It was the second day of my arrival at the English capital. The previous day was fully absorbed in walking across the streets of London, gazing at Queen’s guards and palaces.

The sights of Westminster and Leicester lingered on the back of the mind. I had got an average idea of urban London: it is rich and poor, young and old, ancient and modern. Now it was time to explore the suburbs, parks, and gardens.

I gathered all the determination I could and set out for a walk which lasted more than 15kms and gave me a firsthand experience of London suburbs. Winter was in full form, unforgiving and intolerant. But I was ruthlessly determined to discover what was in store for me that day on the untrodden path. And little did I know what waited for me that fateful morning. 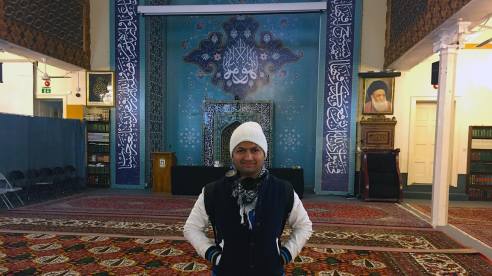 To add to the cold, little drops of rain fell now and then. It was around 10 in the morning. The walk, which began from Cricklewood, took me to new roads, streets, and suburbs, including Mapesbury Rd and Christchurch Ave. Finally when I reached the Brondesbury Park, a banner caught my attention: ‘Help the environment, by sharing cars with family and friends’.

Intrigued by the eco-friendly message, I inched a few steps closer. The signboard read, ‘Imam Khoei Islamic center’. My curiosity was further aroused to have found this in London and I could not stop from walking closer. 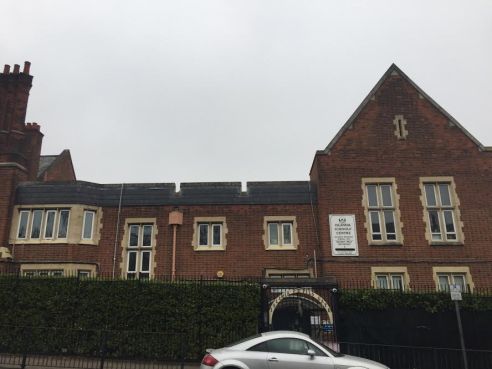 Politicians, not Faith, Feed on Conflicts

A fifty-something man, who seemed to be the caretaker, greeted me. By then I understood the structure and texture of the building I had stepped into. It was a masjid run by the mourners of the Kerbala catastrophe. ‘Am just a visitor, but not here to pray,’ I hurriedly clarified intending not to cause any misunderstanding.

‘I am sorry but I didn’t hear that,’ the man replied, ignoring my apology. ‘Brother, we are children of Adam and Eve. Shia-Sunni conflicts are for the politicians. We need not be hostile to each other,’ he reassured.

He welcomed me to the Masjid and showed around the place, inviting me to photograph anything I wanted. A relic from the Holy Ka’aba in Makkah hung on the wall. The walls and roof were well decorated in stunning Persian architecture. 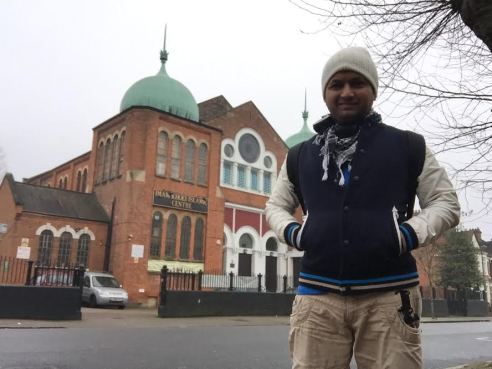 The Problem with Love

‘Our only problem is that we love the Ahl Bayt (Descendants of the Holy Prophet) more,’ he said, while offering me a bottle of water as well as a box of well-cooked rice, prepared at the center, mixed with Arabian curry and a sweet dish in a corner.

‘This is the month of the birthday of Lady Fatima, the daughter of Rasoolullah. We prepare this 5 day a week for those, who attend this masjid,’ he elaborated. Tired and frozen, I could not resist his hospitality, especially the warmth of the cooked rice.

I too did not leave him empty handed. In return, I gave him handful of dates and almonds, which my wife had carefully packed for my solo trip. ‘I am from the state of Kerala in India. And we love the Ahl Bayt even more,’ I eagerly responded. Our brief encounter did not afford me the time to elaborately acquaint him with the legacy and leadership members of Ahl Bayt enjoys in the political and spiritual heartland of present-day mainstream Kerala. Moreover, Ahl Bayt figures chiefly in the semi-religious eulogy literature of traditional Malabar, crafted in Arabi-Malayalam script.

‘Just recite salat-un-nabi (blessings and prayers on Prophet) as you walk,’ he reminded me. ‘Of course, that is how I reached here. InshaAllah till we meet in Paradise, farewell.’ 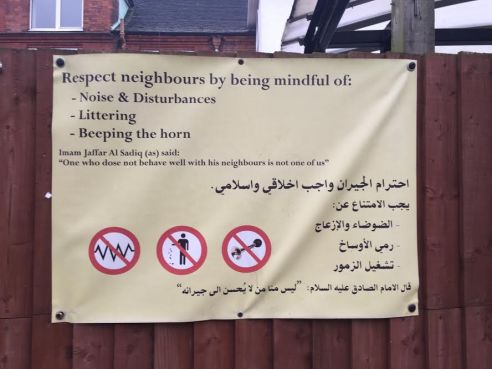 To believe well is to behave well, with neighbors

As I exited the compound, I saw another banner on the fence. It reminded the worshipers to be mindful of the rights of neighbors, including reducing noise, avoid littering as well as refrain from beeping the horn.

‘One who does not behave well with the neighbors is not one of us,’ a quote from the saintly scholar, Jafar Al Sadiq.

This is all that a human needs to do today: To cause zero disturbances for his or her neighbors – at individual, community, and national levels.

We have somehow confused spirituality for identity politics. Worshipping the Lord does not have to mean intimidating His creations, be they of any faith denomination, or no faith at all. Muslims have to be not only environment-friendly, but neighborhood-compliant as well. A lesson so badly missing from the present-day paranoid pulpit’s theatrical talks.

This is the sum total of the life of Holy Prophet. His family illustrated the same with immense suffering, patience, and sacrifice. Hence, they became the darling of millions, of humans and angels.

I continued my walk in the cold – this time with the warmth of the ‘Fatimi’ morsel.

Bio:
Mujeeb Jaihoon is a UAE-based writer, orator, and wanderer of Indian origin. His published books include, The Cool Breeze From Hind, a spiritual travelogue across Muslim Kerala and Mission Nizamuddin, acclaimed as the world’s first Twitter-based micro travelogues across North India. He has journeyed to remote areas of Western China, Uzbekistan, Georgia, Egypt, Jordan, and Palestine, besides the Arabian Gulf countries. His blog could be reached on http://www.jaihoon.com.