It’s a chilly December night. The time is already 2:30 in the morning. The mercury has dipped to less than 10 degree celsius. This is one of the coldest nights of the season. There is hardly any human presence on the roads. Mubashir and I, along with two other friends, are coming back from the university library. We had decided to stay long that night as all of us were having our semester exams in the morning. We live in this very congested pocket behind Jamia Millia Islamia, called Batla House in South Delhi. The name does not go down well with most people outside of this pocket. Batla House is a very busy market, and perhaps the most congested residential place in Delhi. With people trying to move in and out, vehicles parked on roads, and vendors mostly selling their stuff by parking their carts on road, traffic jams are a common sight. The place I have rented is hardly 15 minutes’ walk from my university. I’m usually back by 9 o’clock in the evening. While we are walking towards Batla House, two of our friends leave mid-way. A couple of streets down our apartment, Mubashir and I notice some workers repairing the road that was dug open to supply MCD (Municipal Committee Delhi) water to the inhabitants. Yes, inhabitants of some highly congested areas of Batla House still don’t have access to clean water. There are 6 workers filling the dug-up road: one of them a woman, two young boys with barely any beard on their face, two men probably in their 40s, and an old man. A few other men are carrying the concrete mix in a tractor trolley. While I am shivering in the cold, these men doing their job hardly have a proper insulation to protect themselves from the severe cold. There is also a supervisor of the company that has taken the contract of laying water pipes in this area, whose job is to keep an eye on these workers. Mubashir has very good social skills. He starts a conversation with these workers. One such worker we decide to talk to is Devi Lal, who tells about the ordeals faced by workers, both men and women here in Delhi in the winters.

Devi Lal, a 38-year-old worker, heads the group of six workers. He comes from the village of Mahoba in Jhansi on the MP-UP border. Mahoba is a village, some 600 kilometres from Delhi. He has been coming to Delhi in search of work for the past 20 years. He was a young 18-year-old boy when he first came to Delhi, forced by the need to feed his family. The group of workers that is currently working on the project is a hundred-people strong, all coming to Delhi from different states. There are people from Bihar, Bengal, Chhattisgarh, Jharkhand, and other such distant places. About 30 of these workers are women, who join these men in doing the manual labour. Most of these women are here, along with their husbands and children, some even without them. These women do all the work the men do in addition to doing the normal household chores and looking after their little children. One would normally expect these women to earn more. But these women are paid less than their male peers. While we are interacting with these workers, a kind gentleman pokes out his head from an apartment window and asks these workers for tea. Mubashir and I decide to leave as it is getting too cold and because we are having our exams in the morning. Upon reaching our room, both of us develop some kind of restlessness. So, we decide to go back and talk to those workers one more time, this time with a very curious mind. The time is around 03:15. This time we decide to talk to the young supervisor, who has been noticing us for quite some time while the workers are busy repairing the road. 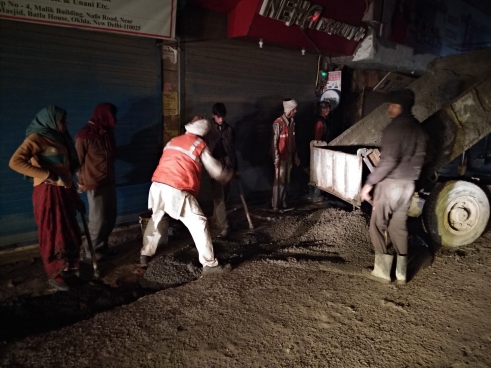 The supervisor is an 18-year-old boy, Aasif, who has been working with the company for the past seven months. It is the supervisor who tells us about the company. The workers we talked to earlier didn’t even know the name of the company they are working for. The company goes by the name of Tirupati Construction Co., which is a registered contractor with Delhi Jal Board that lays water pipes and construction of sewage pipes in Delhi. This group has a national presence, according to the supervisor we spoke to. Aasif is a 10th pass student, who says that he got the job of the supervisor after he qualified an interview. Moments later, Aasif however admits that the job was due to the influence of his father, who has been working with AAP’s local MLA, Amanatullah Khan, for the past 20 years. The company pays Aasif a sum of 10 thousand rupees per month for keeping an eye on the workers. According to Aasif, there was no documentation done at the time of his appointment. The company doesn’t even provide an identity card to its employees and the salary is provided to them by cash, which alludes to the fact that these are not registered employees and are working with the company without a written contract.

While we finish talking to the supervisor, the tyre of the tractor carrying concrete mix punctures and the workers get some moments to relax. Soon after, we get back to Devi Lal. He has a very tragic story to tell. His wife, children, and parents live back in Mahoba. Devi Lal has been working very hard all these years to provide for the basic needs of his family. He gets to see his family just two times a year. All these men and women work double shifts of 6 to 8 hours daily, one in the day and one in the night. According to Devi Lal, these workers hardly sleep for 3 hours. The present shift ends at 5 am and they go back to the temporary shelter. And another shift awaits them in the morning at 10. These men earn about 300 bucks for a single shift. The women earn a little less, about 260 to 270 bucks for the same amount of work. The same women who do manual labour do cooking back home. After so much of hard labour that these men put in, they only manage to earn about 10 to 12 thousand a month. Of these 10 to 12 thousand that Devi Lal earns, he sends more than half of it to his family in Mahoba. The rest? He saves most of it and when the amount is substantial enough, he returns to his home for a break. On being asked what compels these young men and women turn to big metros and not work back home, Devi Lal in a disappointed tone says that he is willing to work for even 200 bucks a day but there is no work back home. He says, “Kon gharwalon se door rehna chahta hai, magar ghar pe koi kaam bhi tou nai hai karne ko” (Who wants to stay away from one’s own village, but there is no work there, not even at home). When I mention about different schemes the government has put in place like the job guaranteeing MNREGA, Devi Lal quips, “Saheb, sarkaar ne tou bohat suvidhayein rakhi thi, magar chor sara maal kha jate hai. Hamare liye koi paisa nai bachta aur koi kaam bhi nai hota.” He is disgruntled with the corruption in the system that restricts a poor man from enjoying the benefits of schemes the government has provided for them. Moreover, they are least aware about the social security schemes the government is spending so much money on advertising. When we ask if they have a workers’ union, he seems to have no idea and we explain to him what a union really is.

These workers live in the nearby Dhobi Ghat Park on the Yamuna Banks in polythene tents from the roofs of which water drips in the night. These tents were provided to them by the company they work for and this is the only thing the company provides. If you have ever been to the Yamuna banks on an early winter morning, you would know how cold it can get. In the times when the Indian government is spending so much money advertising the Swachh Bharat Mission, these young men and women and their little children have no proper sanitation in place. These people often rush to bushes to relieve themselves. The only food these people have is some rice, chapattis and, the food of the poor — yes, potatoes. I wonder how eating the same thing every day provides for nutrients required for their bodies and their little children. One should see their young children to witness what malnutrition really looks like. And these children when reach the age of 13 start working too to ease the pressure on their parents. These children do not enjoy the privilege of education and school is just a distant dream for these kids. I remember walking through the lanes of Batla House the other day and these workers digging up the roads, and their little children, hardly a year and a half old, playing besides their working parents. These babies are so small that if they fall in the pits, which were dug up, they may get wounded, sometimes seriously. A mother, while breastfeeding her baby, says, “Ghar pe koi nai hai khayal rakhne wala. Wahan kon dekh rekh karne wala hai. Wahan tou bookh se marr jayeinge” (Who else is there to take care of them at home; there is no one. If we keep them there, they will die of hunger). These children get no proper meal or proper healthcare. A sick day means a hungry stomach that night.

It is 4:30 and another tractor with concrete mix arrives. We decide to leave. We go back to our room and sleep on our comfortable mattresses, which make us forget all the tiredness we had. This piece germinated from the unease – both personal and academic – that I encountered after meeting these people and seeing their condition.

So, the next time when you are sleeping on your cosy beds, do look out. There may be a Devi Lal working to provide for his family, working for you, for humanity.

Mubashir Ahmad is a master’s student at the Centre for the Study of Social Exclusion and Inclusive Policy, Jamia Millia Islamia, New Delhi, India.