Evening has dusked Satpula, a Tughlaq-era dam in the heart of south Delhi, cradled by the bustling neighbourhood of Khirkee. A young man is rapping, the one next to him beatboxing, another “toprocking” – a technique in breakdancing based on complex footwork – and a fourth nodding his head in time to the beat.

MC Hari is responding, impromptu, to a request for a song, as MC Freezak (Mahesh) accompanies him with percussive sounds and MCs Akshay (Sandeep) and Shiva watch the performance. They constitute Khirkee 17. Named for the postal code of their ‘hood’, the crew’s members, now in their early twenties, have known each other since they were teenagers who were exposed to the allure of hip-hop through Orkut and chart-topping Bollywood music videos like Aloo Chaat by British-born rappers RDB, Nindy Kaur and Smooth.

As Gully Boy hits screens this week, it’s worth noting that Bombay isn’t the only city with galis of talent. But apart from the phenomenally talented Prabh Deep, no other names really come to mind. Last year, AR Rahman’s score for Iranian filmmaker Majid Majidi’s Beyond the Clouds, featured a rap track called Ey Chhote Motor Chala. The film is based in the slums of Mumbai; the rap, about vrooming through the city on a motorcycle and taking over the world, is full of youthful vim and swagger. The song is by MC Heam aka Hemant Dhyani, a young man who teaches music as part of a Dharavi-based initiative called SlumGods. It’s named for the crew, led by local b-boy Akash Dhangar, that helped bring hip-hop into the lives of young Dharavi residents in 2009. But this isn’t a Bombay story.

SlumGods came about with the support of Tiny Drops, an organisation founded by two US-born Indians at the turn of the last decade in both Dharavi in Mumbai and Khirkee in Delhi to teach hip hop to gali kids. Netrapal Singh alias He Ra and Mandeep Sethi realised that a form born from an American experience of deprivation could only flourish in India if taken up by young people from similarly marginalized communities. Sethi “discovered” Najafgarh’s finest, MC Heam, in 2013, the first Hindi rapper to perform at San Francisco’s TeamBackPack Cypher. MC Heam’s professional roots can be traced to south Delhi’s working-class hip-hop subculture, “I’ve been rapping for about ten years now, from school. For a couple of years in the beginning I promoted and managed a crew called SlumGods of Khirkee Extension that came out of Tiny Drops.” This was between 2010 and 2013. Back then, the namesake crews from different cities often got confused for one another, much to the chagrin of the Delhi group, that has since changed its name and some of its members.

There is something to this sentiment of always being obscured behind Bambaiyya talent –rappers Naezy and Divine get the attention of Bollywood and bigwigs like AR Rahman and Shekhar Kapur support the Dharavi Project that enabled MC Heam to land this career-making gig. The contrast in cultural ecologies in India’s biggest metropolises seems to be that while Bombay has the business framework such as the film and music industries, Delhi has the institutional substratum such as museums and arts organisations. The underground angst of Indian hip-hop culture has long been co-opted by the commercial mainstream as it did decades ago in North America, Bombay being the locus. In the course of a phone interview, He Ra avers, “Some of these kids ask me how to get a Puma deal like Divine. I tell them to go to Bombay.” But not everyone wants to.

A medieval basti, Khirkee village and its surrounding region are a symbol of the Delhi government’s redevelopment initiatives over the past two decades – inequitable and askew, gentrification rubbing up against neglect. This context is comparable to the socio-economic conditions in which hip-hop culture originated in the Bronx of the ’60s and ’70s, also a consequence of the state’s urban planning efforts – constructions, slum clearance and renewal – at the expense of subaltern populations. 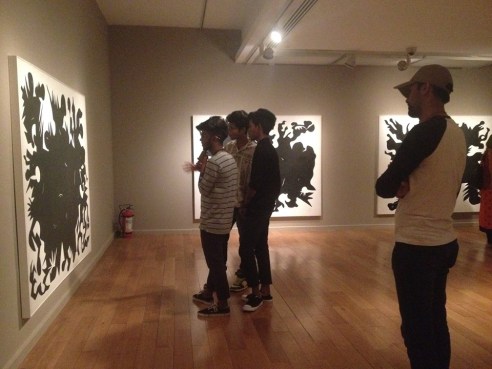 Artist Aastha Chauhan, who worked with the boys as part of an outreach initiative by KHOJ, an international arts organization, points out how the glamour of the plush Saket District Complex across the road is at odds with the realities of the b-boys’ lives. Some of their parents work in the homes of affluent colonies nearby and are employed in lowly positions in the malls. One of the boys recounts how, when they were younger, security guards at these malls used to drive them away. In 2016, they were commissioned to make a months-long intervention by the Kiran Nadar Museum of Art across the road, one of those places in their neighbourhood that they wouldn’t have been able to enter a few years ago. Their time there, engaging with the works of KG Subramanyan, Nasreen Mohamedi, Himmat Shah and Jeram Patel, culminated in Hindi rap walkthroughs and T-shirts featuring the works of modernist royalty. In a country paralysed by caste and class violence, it was an unusual blend of elite culture and the art of the disenfranchised. Indeed in the past few years, catalyzed by participatory art projects enabled by KHOJ and KNMA, Khirkee village has witnessed a cultural effervescence – a neighbourhood festival and a newspaper called Khirkee Voice are the results of local talent finding the opportunity to shine.

The boys are kings of their realm, involved in their community and, like hip-hoppers everywhere, aware and alert. Freezak asserts, “Our songs have a social message – we’ve rapped about making streets safe for women and been part of the anti-corruption movement.” They organize workshops for municipality schools, engage with conservative elders, generate awareness through their art and lead walks as part of the Delhi Walk Festival. Hari grins cheekily, “Akshay performed his sarkari rap at this year’s Youth Festival. He was talking about the government at their event!”

Ironically, the Delhi government had a hand in their artistic development. “We used to dance by ourselves in the DDA park,” says Hari, gesturing vaguely to the chunk of low-rise buildings abutting the walls of the dam’s sprawling complex and offering occasional jump-off points for them to bound into and out of its precincts. Behind it are their galis. Everyone exchanges looks and Freezak nods warmly, “We were on our own, till He Ra bhaiya brought us together.” They met at Tiny Drops Community Centre in Khirkee, a space that He Ra had set up in the apartment he shared with his partner Radhika. Although they’ve since shifted to Mussoorie, it’s clear that the lessons they gave these young men have left a lasting mark.

In 2018, the Red Bull BC One Cypher was held in NCR for the first time since its inception four years ago. Freezak shrugs, “I couldn’t even make it properly inside as a spectator…it’s folk who don’t understand hip-hop at all who make up those crowds.” Hari talks proudly about how two years ago, Khirkee 17 had organised Asli Log, a street cypher featuring acts from around the city. Their mentor He Ra weighs in, “That’s what it’s really about – homegrown talents and local, underground jams within the community, not these big commercial stage shows.”

Art and commerce often make necessary bedmates; dancing has taken a backseat for Khirkee 17ers as they try to figure out ways to support their passion. They do all kinds of often-demeaning odd jobs, perform at corporate events to make ends meet, aware that it isn’t what they would necessarily do if they had a choice. Shiva speaks of the injuries they’ve sustained over the years and family pressure to help out at home. You wonder what they make of MC Heam’s success; after all, he continues to be an independent artist, just with international exposure. They have ambitions: “We want to eventually start our own recording label.” Akshay works at a recording studio, Freezak learnt video editing, and they are all involved in a joint venture of making and selling T-shirts under an eponymous brand name.

“It was unimaginable”, says He Ra, “seeing this kids grow up has been a journey.” He says with the satisfaction of someone invested in and equally affected by the wellbeing of his young friends. Last summer, he returned to New York seventeen years after having been deported in the wake of 9/11. Khirkee 17 is the legacy he leaves behind.  Chauhan characterizes any attempt to determine Khirkee 17’s narrative as one of paternalistic transformation as irresponsible, “People have gone into their homes and filmed their families just for effect.” He Ra cautions against overestimating Delhi’s vaunted institutional support for artists from disadvantaged backgrounds, terming it ultimately limited and exploitative. Their story offers a sobering antidote to exceptional narratives, such as the meteoric rise of artists like Prabh Deep. MC Heam’s trajectory conforms to that trope more readily. Rather than fantasies of global superstardom, the dreams and struggles of Khirkee 17 suggest other worthwhile possibilities: of communitarian resistance to market appropriation, of the intrinsic value of a creative life. It’s that spirit that infuses hip-hop and has caused their own lives to be stabilized and enriched, if less dramatically than some of their peers’. There are, after all, definitions of success and a fulfilling life other than those that make for a blockbuster movie.

Bio:
Kamayani Sharma studied philosophy and gender studies at Fergusson College, Pune and did her Master’s from the School of Arts and Aesthetics, JNU. A former text editor with the Bombay-based visual arts quarterly, ART India, Sharma is a regular contributor to Artforum, The Caravan and Scroll.in. Her writing has appeared in Firstpost, Arre, and Studies in South Asian Film and Media. She has been a research associate to an anthropologist, taught philosophy at Ashoka University, and is currently a researcher with Sarai (CSDS).