Author of four books of poetry – Two Full Moons (Bombaykala Books), Words Not Spoken (Brown Critique), The Longest Pleasure (Finishing Line Press) and The Silk of Hunger (AuthorsPress) – Vinita is a Mumbai-based award-winning poet and writer. She was Senior Editor with Womaninc.com for three years. Recipient of the Gayatri GaMarsh Memorial Award for Literary Excellence, USA, 2015, her poems have appeared in Asian Cha, Constellations, The Fox Chase Review, Pea River Journal, Lumen, Cyclamen and Swords, Open Road Review, Stockholm Literary Review, Poetry Pacific, Mithila Review, Chandrabhaga, Blue Fifth Review, The Bombay Review, and other journals and in anthologies from Australia, Ireland, and Israel. She was nominated for the Best of the Net Awards in 2011. Her poem won a prize for the Moon Anthology on the Moon by Tall Grass Writers Guild 2017. She was awarded first prize in the Wordweavers Contest 2014, commendation prize in the All India Poetry Competition 2014. She contributed a monthly column on Asian Poets on the literary blog of the Hamline University, Saint Paul, USA, in 2016-17. She judged the RLFPA poetry contest (International Prize) in 2016 and co-judged the Asian Cha’s poetry contest on The Other Side in 2015. She has read at the Kala Ghoda Arts Festival, Lucknow Literary festival, Cappuccino Readings, and Women Empowerment events. She is on the Advisory Board of the Tagore Literary Prize.  She can be reached at www.vinitawords.com 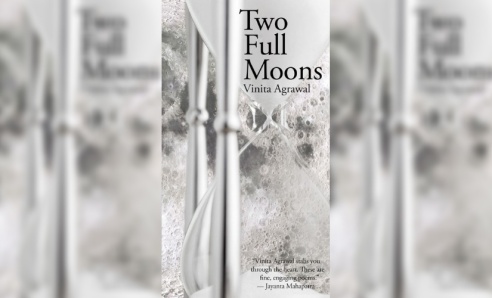 Poornima Laxmeshwar: In the opening poem, “Behind the Moon”, you write:

“Can I hide behind your calm facade, Moon,
the sandstorm of a closing heart
and this year of wounds?”

Is that your definition of a moon? Do you think that moon is a masked face with thousands of wounds inside? Isn’t that how we humans too most of the times try to get away with life?

Vinita Agrawal: Actually, no. The first line is a question addressed to the moon – asking if I could hide my turbulent heart and a year of wounds inside its calm facade.

For me the moon is a confidante, almost an entity to whom I can confess anything.

PL: There is a consistent introspection and observation of the relationship between existence and self. This has been portrayed with beautiful imagery that compliments the emotions. Do you think it comes naturally to you as a poet? Or do you think the perspectives have deepened with experiences in life? Of course, the section itself is called ‘Existence’. For example, from the poem, “Dunes of Life”:

“Despite the windows
without the winds we’d be trapped”

VA: It comes to me naturally, I guess. I say this because when I visit poems from my first book, I see that many of them are also about existential angst. About this clawing search for the real essence of life. The explorations are handled with slightly more finesse in TFM perhaps because I have more experience with the craft now.

PL: The title of the poem says “Ten Perfect Dreams”:

“Little opposition from towpaths
Complete trust in strangers
Love — the lynx-eyed predator pouncing more than once
The altar of justice, never empty
Ideals to uphold”

Can dreams ever be perfect? Even though dreams mostly reflect our wants, aren’t they merely extended wishes where we still don’t have the authority to design but to watch?

VA: We all weave our dreams the way we want to. Dreams are one arena where we have full licence to conjure up whatever we want. There’s a song that has a line – our dreams make us who we are. So true. However, you’re right about the ‘watching’ part. Life unfolds and all we can do is watch our dreams evaporate. The Perfect Ten is a poem that depicts my personal idea of utopia, describing ten perfections.

“She is the twin of every aspect that exists in the universe
the half of the whole called man
She is Shakti. The bearer of souls.
Because of her, man exists”

Do you think it is essential that as a woman writer, it is somewhere a bit of an obligation or maybe a sense of responsibility to reiterate the fact that women are no less through our writing? Is it important that we put across our voices and to claim that our right despite the gender?

VA: Writing is a mental and intellectual task. Both men and women are equal as far as the mind is concerned. The difference lies in physique and long live that difference! It’s the way nature made us. The whole friction between men and women stems from the point when men decide to tell women what to do. When they become overbearing and deny her the freedom to live her life the way she chooses. Coming to your specific question, when women write about women’s issues, they are not trying to score points against men. They are not establishing claims of any kind, they are simply voicing things that matter to them and affect them. In the process, if their writing leads to a more sensitive and considerate world, then all the better! Poetry is an art and while it’s not obliged to send out a social message, it does invariably depict the world as it is perceived – with its flaws and thorns.

PL: It is natural for loss to translate into poetry. In the section ‘Family’, the poems seem to be capturing grief and trying to hold on to those dear moments that are lost in wheels of time. In “Buttons”, you write:

“Buttons that had nestled
in the pestle of Grandma’s hands.
Buttons that now fastened
memories to tissues of love.”

VA: I think we can immortalise people with our poetry, not just keep them alive. I’ve been told that it’s unhealthy to hold onto regret, guilt and loss but even so it’s hard for me to overcome what I’ve lost. I’m only just beginning to come to terms with it. So, for me at least, it is natural for loss to turn into poetry. I speak only for myself.

PL: There is a separate section of poems that speaks about mental health issues. What prompts you write about this? It touches upon dementia to suicide to depression, as in “Blue”:

“Blue breaths filling sighs
homeless winds trapped in a sea-search of voices.
I swallowed all the shadows
my throat unfurling on time gathering all darkness”

Tell us more about this.

VA: I see these issues all around me. So, I was prompted to write about them. It’s time we stopped brushing mental health under the carpet, time we gave it proper attention and compassion.

PL: In “Disembodied Bamboo”, you write:

“Bamboo has a voice
the voice of hollow hunger
as though a whole country cries inside its flute
giving out a disembodied signal.”

Would you agree that as poets we should write more on issues that are political too? That what we write must not only be restricted to abstract imagination but also must contain the problems of the soil. Or is it a choice?

VA: It’s always a choice. There are poets who enjoy writing about nature. Some focus on emotions, relationships, some on spirituality, etc. One is not obliged to write on political issues. That said, political satire and political poetry is quite popular these days. It’s trendy. Makes good content for Spoken Poetry too!

PL: A very quick question here. There are two separate sections – ‘Heart’ and ‘Soul’. Aren’t they the same in terms of living? Isn’t soul but all heart?

VA: When you put it like that yes, it is. However, in my book, the Heart section deals with emotions and the Soul segment deals with spirituality and philosophy.

PL: What prompted you to write “Apology to a Tree”?
“I apologize to you

Is it a result of the guilt or helplessness or human indifference to nature?

VA: I love trees. They are the first thing I notice whenever I visit a place. It’s agony to watch trees being cut indiscriminately. The poem is born purely from my love for trees.

Bio:
Poornima Laxmeshwar resides in the garden city Bangalore and works as a content writer for a living.