At a time when the discourse on partition is being revisited and reinterpreted, it is important to articulate an Indian Muslim perspective of the events. It is 2020 and the BJP has brought the country to the brink of another partition, which even if not territorial has certainly polarised the nation once again on purely communal lines. The polarisation and hatred have made the Muslims of India reconsider their options for a secure future and identity. If a people do not know where they stand, it would be even more difficult to lay down a roadmap for a secure path ahead. And for this very reason the Indian Muslim community needs to revisit and reflect on those events in history that have shaped the reality they live in today, and no event is more important and decisive than the partition of the country in 1947.

Amidst the protests against CAA-NRC that broke out following the police crackdown of Jamia Millia Islamia on the night of 15 December, 2019, BJP politicians from across the country have made controversial statements associating the Indian Muslim community in one way or the other to the embarrassments of partition. The BJP MP from Begusarai, Giriraj Singh made a statement regretting that the country is paying price for not having sent the entire subcontinent’s Muslim to Pakistan. The BJP Chief Minster from UP, Yogi Adityanath made a similar statement claiming that Indian Muslims did no favour to India by staying back. As a result of all such statements that the BJP leaders openly make with impunity, the political milieu of the country today has become toxic and polarised.

Therefore, it is an imperative upon the Indian Muslims to revisit and reinterpret the discourse around partition. The Indian National Congress set up the nationalist discourse around partition in such a way that all blames for the event were laid on the shoulders of Muslim League, led by Jinnah. The BJP today is just steering this nationalist narrative of the Congress to its logical end, i.e., to blame the Muslims solely for the tragedy of partition and to paint political assertion of Muslims with the same brush of treason and secessionism. Thus, the politicisation among the Indian Muslim population is seen in the same light as Muslim League’s ‘dangerous’ and ‘divisive’ politics. 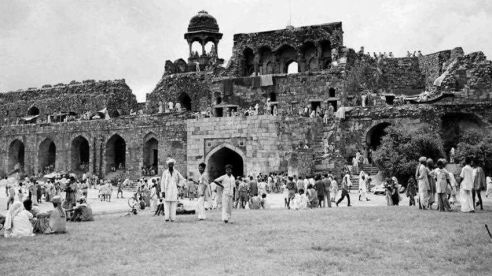 BJP’s natural response to anti-CAA-NRC protest is that such political assertion by Muslims could lead to yet another partition of the country, as it is evident from the party’s comparison of Shaheen Bagh with Pakistan and Sharjeel Imam with Jinnah. Indian Muslims, having been brought up and indoctrinated in the INC’s nationalist narrative around partition, found themselves trapped in a deadlock, wherein if they demanded political rights, they could be labelled as traitors. To cover up this vulnerable position, they sought the help of symbolism by extravagantly decorating their protest sites with tricolours and portraits of freedom fighters. Meanwhile, WhatsApp forwards of Jinnah’s unverified statement, “Muslims who want to stay back in India will have to prove their patriotism to India for the rest of their lives” are also making the rounds on Muslim groups. All of this further adds to the anxiety of an Indian Muslim, who unable to think of a way out of the deadlock sighs, “What now?”

The only respite lies in dismantling the superficial nationalist narrative around partition that the ‘Congress System’ has ingrained in our minds over sixty years. No, the Muslim League led by Jinnah was not responsible for the partition of India. Blaming the Muslim League is like blaming a deer trying to flee from a predator’s attack. The deer has to flee but for the reason of survival. The predator in the Indian case is the majoritarian politics of Hindutva. Although this politics was chained and tamed under the Congress in the first few decades after independence, it got unleashed on the Nation as the INC weakened and disintegrated. This was also the League’s apprehension that a Muslim minority would have an uncertain future under a Hindu majority that might slip into majoritarianism any time. The events preceding partition witnessed communal violence at an unprecedented level, that the Muslims at that time apprehended could be a recurring possibility in a Hindu majoritarian state.

Jawaharlal Nehru, too, was aware of the dangers of India slipping into the hands of Hindu majoritarian forces, as he for a certainty knew how fragile the secular fabric of a newly formed India was. Ironically, Nehru’s first query when the news of M.K. Gandhi’s assassination reached him was regarding the creed of the assassin. The assassin happened to be a Hindu, but had he been a Muslim a genocide might have followed, the kind that occurred following the assassination of Indira Gandhi at the hands of her Sikh bodyguards.

The two choices before the subcontinent’s Muslims in 1947 depict the two central human temperaments at the time of a tragedy: fight or flight. The former temperament could be related to idealism/optimism and the latter with cynicism/pessimism. It was sheer idealism of the Indian Muslims who chose to stay back at the promise of a secular nation that would grant them equal political rights; the behaviour of those Muslims who left for Pakistan could be understood as a more cynical and pessimist response to the tragedy of partition. The real monster behind the tragedy of partition was the looming majoritarian politics of Hindutva, the ideology that drives the BJP government today.

The reality today might prove the political wisdom of Muslim League right to some extent; they chose a different path and have their own challenges to face. However, the challenge before Indian Muslims today is to topple the superficial nationalist narrative around partition that has clearly favoured BJP’s divisive agenda in the long term, and to become the determiners of their own fate than depend on the mercy of secular parties for recognition or the United Nations for survival.