It was Thursday and I was on a bike ride to Tirur town, located in the Malappuram district of Kerala. I was sitting behind one of my childhood friends. As I began to chat with him, he spoke very enthusiastically about his Hindu friends and colleagues in his village. I was quite surprised to hear about their experiences of interreligious harmony.

It was also the same Thursday, when the much-awaited Malayalam movie, Charlie, was about to be released in Kerala. When he and other Muslim guys planned to go for the opening show, their Hindu friends stopped them, citing that it’s the holy day of the Prophet’s birth. And they consoled them by urging that they would go day after the birthday of Prophet Muhammad. In Kerala and several other parts of the world, traditional Sunni Muslims still deliberately avoid watching films, as per their religious tradition.

I looked at him in amazement as he continued, “Our Hindu friends will even mute the ring-tones in their mobile phones when they hear the azan from the mosque, whereas we merely turn the volume down.” This is quite a picture of the respect that Hindu brothers in Kerala show to their brothers in other religions. This locally prevailing tradition is something we could imbibe in these times of religious intolerances. In this case, it’s the youth, who lead in showing respect for other’s religion and culture. And this tolerance is not born out of a belief in atheism but evolves out of the belief of practicing religionists. Perhaps, the youth would be able to outlive the forces of communalism in India and elsewhere.

It was on the same day so many of our Hindu brothers amazed me by appearing beside the Milad-un-Nabi (the celebration of Prophet Muhammad’s birthday) processions. In fact, they were distributing sweets to brothers in other religion. 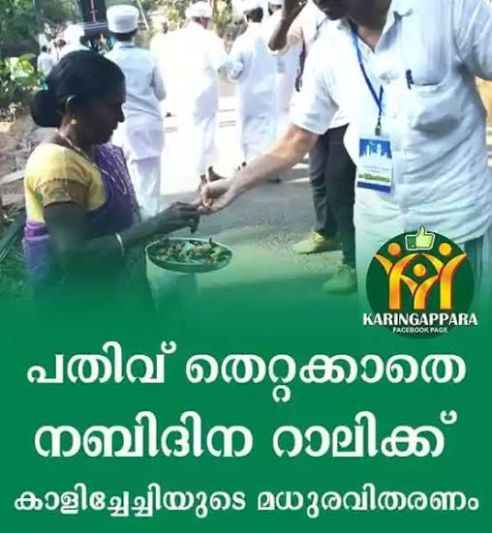 Some of them made flex boards in which they presented their warm Milad greetings for Muslims. Muslim brothers appreciated this warm reception through social media networks. Sheikh Aboobacker Ahmad, one of the very famous traditional Islamic scholars in Kerala, had posted in his official Facebook page a picture of a Hindu brother distributing sweets to Muslims. In multiple localities in Kerala, this is a common practice. Some of the temple committees supported and sometimes even steered the reception programme for the Milad processions. This sound coexistence and harmonious brotherhood can navigate this society towards a broader world of humanity, letting others live with their religion and customs. The same respect is also given to the Hindu brothers in Kerala. Hopefully, this example of coexistence could navigate the society toward a broader humanity.

When I asked some of my Hindu friends, why they celebrate and participate in the joyous occasions of Muslims, several of them said, “The reason for respecting other religions and their customs is our deep knowledge about our Muslim neighbors. It also has to do with our engagement with them since our childhood. Moreover, they invite us for their celebrations. We consider them as our real brothers.”

This tradition of love and brotherhood was inherited by them from their ancestors.

Author:
Muhammad Ashraf Thachara Padikkal is completing his graduation from Madeenathunnor, Calicut, Kerala. He is an interviewer, writer and independent research fellow, specializing in the areas of Sufism, Islamic studies and cultural anthropology. He is also interested in tradition, philology and subaltern literature.