I have travelled in Vikrams in every city I have ever lived. There is a loud thud-thud that you come to associate with being in it. Also you have to huddle knee to knee with other fellow passengers or ‘savaris‘. One afternoon, I entered a blue Vikram. The potato-potato sound was absent. So were the passengers and the driver. I was alone in the beautiful blue Vikram. 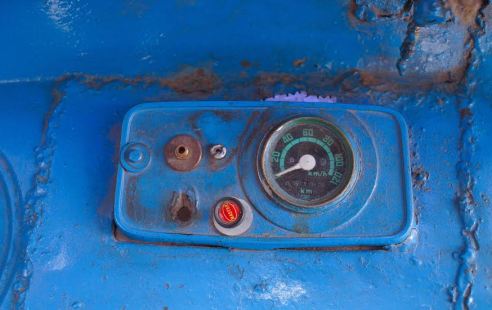 The big hole is used to tuck in agarbatti sticks which burn all the time during the ride. The blades (if you can spot them!) are used to cut open agarbatti packets, weed packets and faces. I have never seen the last bit happening but I do not doubt that it has happened in many Vikrams.

The Vikram is not just a vehicle for the driver. It is a home away from home on wheels and also the sole breadwinner. It carries the names of the Gods across its chest. It has a tiny ghungroo tied to its anklet affectionately. When the driver earns the first keep of the day it touches it with the note and gives it a few spins to ward off the eye.

It usually pays off to sit in the front seat with the driver. You get a good view through the agarbatti smoke haze. If you wonder why they burn agarbattis, it is to mask the smell of the ganja. Maal/weed smoke has a quite distinctive smell but mixed with incense smoke, even trained noses can’t differentiate it that easily.

Yes it is a bumpy ride, the drivers are a bit brash and they jump red lights often. They will stop to get another ride in the midst of moving traffic and they will make swift cuts in heavy traffic. Once an octogenarian with a big walker climbed in one Vikram. He got on easily because he was supported by a friend who came to see him off. He was having trouble getting off but the driver made sure he did easily. The driver even scolded his cohort (who keeps charge off the passengers) because he was not helping the aged man.

All everyone does inside the Vikram is talk, talk and talk! It is interesting sometimes to listen to common folk talk. Usually the passengers are all from lower middle classes. Once I heard a man talk about the dangers of dismantling Nuclear Power Plants and the vast decommissioning process and I was mildly surprised. 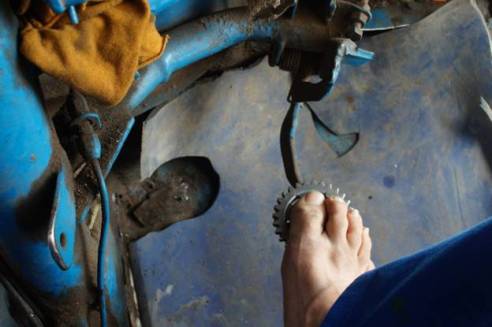 I have often fantasised about driving an auto or a tempo in the yellow night streets. “What a shame!” my parents would scream if they descry me. My friends would probably wonder why I got a college education in the first place. Maybe no girl I know would ever talk to me. I think both autos and Vikrams are beautiful. Of course I would drive them all alone and empty without a savari to accompany me. After all it is the single wheel in the front which enchants me the most.

Bio:
Ronak Singh Bhasin is also known by his pen name pagalkavi. When he is not banging around verses on his old typewriter, he is busy documenting the streets of Delhi with his analog camera.

Read the latest issue of Cafe Dissensus Magazine on ‘Cosmopolitanism in a City: The Past and Present of Calicut’, edited by Archa NG, Research Scholar, JNU, New Delhi, India.