It had been on my mind for a long time to visit the one and only existing Chinese Temple at Mazagaon, Mumbai. I had been pestering my Chinese friend, Dr. Chen, for a while to facilitate my visit and I got the perfect opportunity in the month of February, 2016, on the occasion of the Chinese New Year.

On a bright morning of the Chinese New Year day, I stopped my taxi right outside a clinic, situated in the busy street next to the well-known Delhi Darbar restaurant in Central Mumbai. Dr. Chen, who’s in his fifties, fondly called “Danny”, after the Bollywood actor Danny Denzongpa, is a third generation Indian-born Chinese, a dentist by profession. He has been practicing dentistry for many years in Mumbai. Danny emerged from his clinic with a smile, adjusting his spectacles.

Dr. Chen invited me to a cup of tea at a local kiosk. After a refreshing cup of tea, we walked towards his motorcycle. He asked me to sit behind him and told me that he was taking me to Mr. Albert, a fellow Mumbai-Chinese like him, who is the main caretaker of the Chinese Temple and one of the prominent members of the surviving Chinese community of Mumbai.

On the way to Mr. Albert’s home, we passed through Shuklajee Street. Dr. Chen stopped his bike, pointed at a dilapidated building, and said, “This is known as China Building. It used to be owned by the Chinese and, in my childhood, it was full of only Chinese residents. And do you see that street under it? It was once a bastion of the Mumbai Chinese and was a thriving Chinatown that was full of Chinese owned shops and restaurants.  It had a significant number of Chinese residing in this entire locality.”

I was surprised to hear that because I couldn’t see any trace of Chinatown or Chinese presence on that day. Dr. Chen told me that he was a teenager, when the India-China War in 1962 broke out. Although he was not personally affected by the war, it spelled death-knell to the Mumbai Chinese community, who never recovered from the effects of the war upon them.

In a few minutes we reached Mr. Albert’s home. He greeted us warmly and offered us juice and dry fruits on the auspicious occasion of the Chinese New Year. It was the year of the Monkey, according to the Chinese calendar.

I asked Mr. Albert about the history of the Mumbai Chinese community. He informed me that most Chinese, including his own ancestors, had arrived in great numbers during the British Raj. The Chinese in India came from all parts of China: some were Mandarin-speaking Chinese or spoke the Hakka dialect from the mainland; others came from the coastal Cantonese-speaking region. 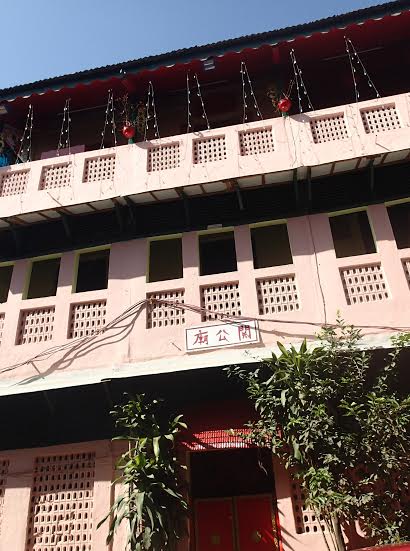 Most of the Chinese immigrants were enterprising traders and businessmen; some were dentists and expert shoemakers. I asked Mr. Albert the reason for the decline of the Chinese population in Mumbai. He took a deep breath and, through his gritted teeth, informed me that after the War with India in 1962, there was a general hostility towards the Chinese-Indians all over India. The local people looked upon them with suspicion. The Chinese-Indians were considered the fifth column by the government and many were sent to internment camps.

Mr. Albert and his family were spared the trauma of the internment camps, but many others were not so fortunate. His own brother-in-law had a harrowing experience in the camp, where he and his family had to undergo great suffering before moving to Canada for good.

After the war ended, many Indian-Chinese were deported to China and some left for western countries like Canada. In many cases, the Chinese properties were looted or destroyed in the riots that followed the war. Those who returned from the camps were shocked to find their houses and properties looted and occupied by local bullies.

The Chinese, who did not leave Mumbai and stayed back in India or were not deported, continued to face hostility from the local population. They were refused jobs and, hence, the younger Chinese eventually decided to move to west for a better future. A large number of Mumbai Chinese settled down in Canada and now most of them have moved on with their lives. However, some of them are still bitter about their forceful displacement and the humiliation they had to endure in the internment camps in India.

Mr. Albert informed me that some of the Chinese-Indian diaspora in the west had hoped that the Indian government would accept its mistake and apologize for the inhumane treatment meted out to the Indian-Chinese, just the way the US government had apologized to the Japanese-American community for the trauma of internment, following the Second World War and the bombing of Pearl Harbor in 1942. This is because the Chinese-Indian were completely innocent and an entire generation had to face painful internment and deportations only because of their ethnicity.

Suddenly Mr. Albert voice cracked and he stopped speaking. I could see that he was still very emotional about the subject. I decided to change the topic and asked for information about the Chinese Temple and the New Year celebrations. Mr. Albert informed me that the Chinese New Year celebrations used to be grand in olden days. With their dwindling numbers and fewer Chinese left in the city, these days it’s the only occasion that brings the small community together. He went on to guide me to the Chinese Temple.

I thanked Mr. Albert and Dr. Chen for their help and made my way towards the Chinese Temple situated near Mazagaon docks, Mumbai.

I boarded a taxi and it took me a few minutes to reach the Temple. As I entered the Temple, I noticed numerous paintings and idols of Chinese deities. In the midst sat an old Chinese, praying – a solemn reminder of the once glorious Chinese-Indian community of Mumbai.

Bio:
Sameer Khan is an Independent writer and blogger. He tweets at: @samkhan999

Read the latest issue of Cafe Dissensus Magazine on ‘The Book that Made an Impact on Me in 2015’, edited by Tikuli, poet and blogger, Delhi, India.