In Fall 2015, I was awarded the ‘Asia on Its Own Terms’ Doctoral Summer Fellowship in the East Asian Studies Department at Tel Aviv University (TAU). It brought together local and international researchers specializing in China, India, Japan, and Korea. This fellowship, which covered our travel expenses and housing in Tel Aviv for a month (May 14-June 18, 2016), was funded by the Yad Hanadiv grant instituted by the Rothschild family.

My decision to travel to Israel at a time when the contentious academic ‘Boycott of Israel’ is in place made my choice a very political one. Numerous people in my life were astonished that I would even apply for a fellowship to Israel in the first place. Many of them sent me numerous articles on the Boycott movement. While I do not support Israel’s unequal war against Palestine, I decided to go because I was curious, was humbled and excited to have won a fellowship, was lured by the rich history of the region, was thrilled at the opportunity to travel, and also looked forward to the generative possibilities of sitting down with a group of scholars studying gender and body in different parts of Asia. Initially I had thought that I will just stealthily go and come without making my travel public on social media and, most importantly, never mentioning this on my CV. But I changed my mind after a conversation with my partner and decided to own up to my actions and bear the consequences, if any, of my decision to travel to Israel.

As my plane touched down in the Ben Gurion airport, I found myself tightly gripping the hand rest as I always do during landing. But what took me by surprise was the thought I had at that moment, “I am going to the land where Jesus walked!” Stepping out of the plane into Tel Aviv was like stepping into an Indian city – hot air enthusiastically welcomed me. The immigration officer waived me in without much ado. 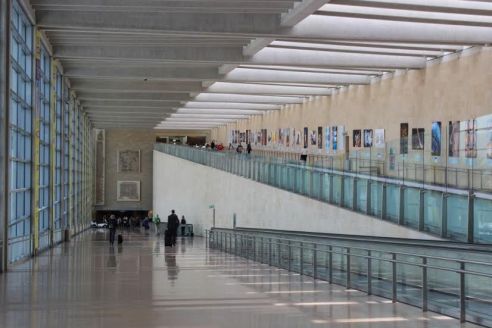 I landed in Tel Aviv on Saturday when Jews observe Shabbath, a holy day. In observance of Shabbath, public transport across Israel shuts down from Friday afternoon until Saturday night. Since I had arrived on Saturday afternoon, taking public transport to Tel Aviv University was not an option for me. I travelled by taxi, listening to melodic Hebrew songs that I mistook for Arabic music. The roads were lined with bright-colored flowering bushes including the bougainvillea, petunias, hibiscus, and varied trees such as the palm, olive, cypress bosh, and eucalyptus. I had not expected to find so much greenery in Tel Aviv. I later learnt that Tel Aviv was very systematically and painstakingly ‘greened.’ 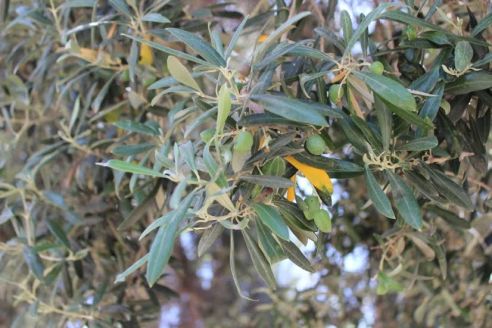 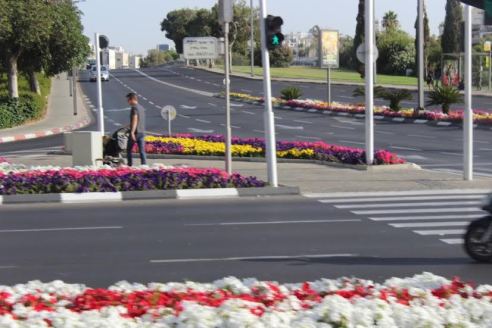 Accommodation had been arranged in Broshim, a beautiful housing complex for students and visitors. 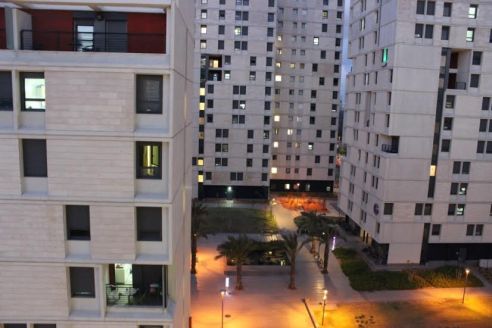 While searching for Broshim on google I happened to come across this newspaper article published in the Times of Israel from which I learnt, among other things, that Broshim, like the rest of the University, is situated on what was once an Arab village called Sheik Munis.

My airy and spacious one-bedroom apartment on the seventh floor offered me a beautiful view of the campus and the Mediterranean in the distance. 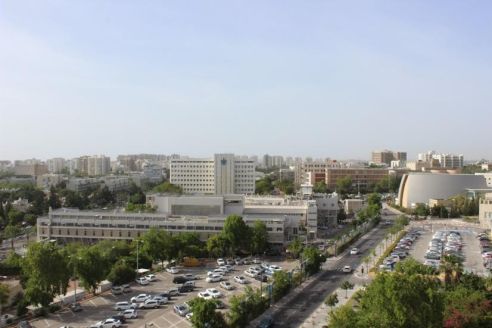 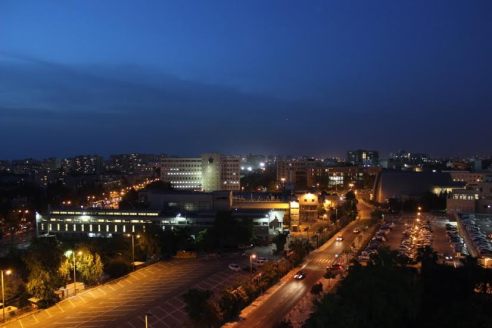 Around 11 pm on my first night in the apartment, I was startled to hear a knock. I soon found out that I was to share the apartment with Lin, a doctoral student from School of Oriental and African Studies (SOAS), and a Doctoral Fellow like me. We hit it off immediately and I know that this friendship will be among the fondest memories of my time in Israel.

One of the first things I noticed during my walks through the beautiful Tel Aviv University Campus was the abundance of Israeli flags. As Lin pointed out during one of our evening walks, “The flags are everywhere.” Flags are a symbol of patriotism and nationalism but such extravagant display, I felt, also underscores a precarious sovereignty. 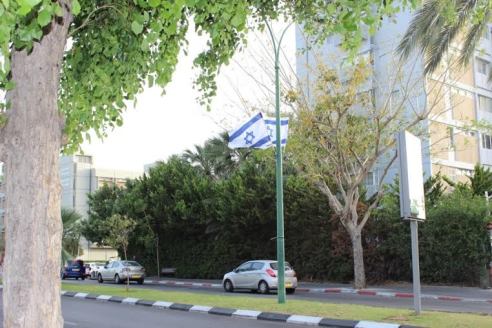 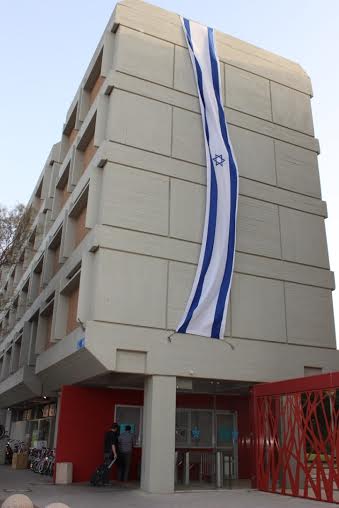 I was too quick to come to conclusions, however! Later I learnt that the day we landed, May 14, is celebrated as Israel’s Independence Day, which explained the over the top display of flags. That said, flags were indeed a common sight in Tel Aviv.

The day after we arrived, Chen (Pronounced ‘Hen’ with an aspirated ‘h’), a Masters student in the East Asian Studies Department, took us on a tour of the campus. While walking through the campus we saw some people demonstrating by the main gate of the University. I was curious to know what it was about. But it was 34 degrees Celsius; my chest felt strange and tight. I felt dizzy and I feared I was getting a sun stroke. So I curbed my desire to go up to the gate and instead asked Chen what it might be about. She said, “It will either be about human rights or Palestine.” I asked her if they could hold pro-Palestine protests and Chen replied, “They can and they should.” It’s only later in my room and when reminded by a friend from New York, I realized it was May 15, the Nakba Day or the Day of Disaster, when Palestinians commemorate the Palestinian exodus of 1948.

While walking through TAU on any given day, it is difficult to imagine that you are in a conflict zone. Palestine and the struggles of its people seem so far away. 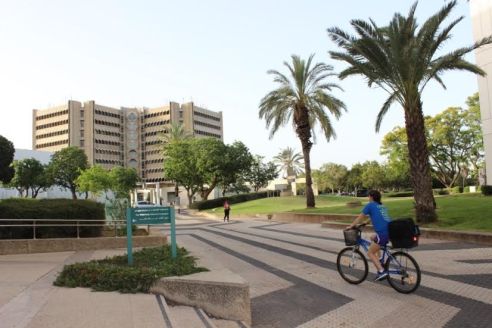 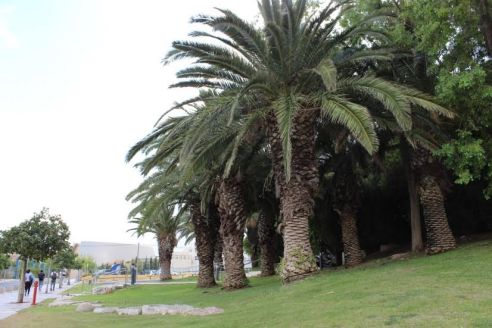 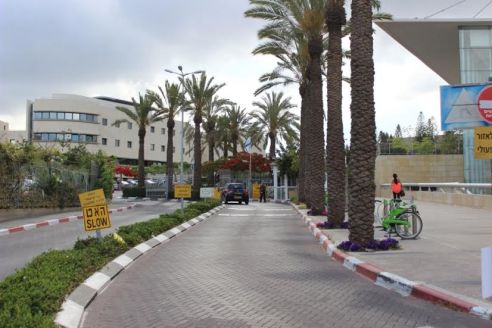 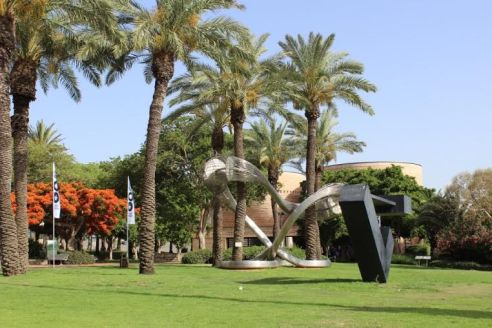 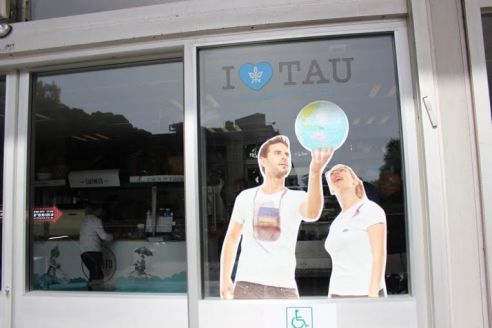 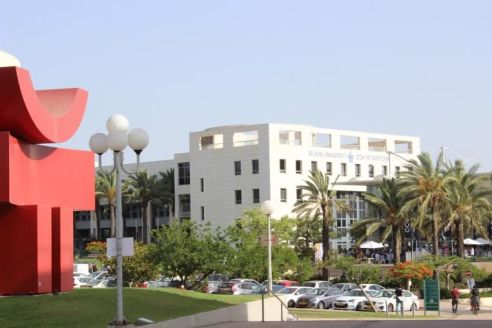 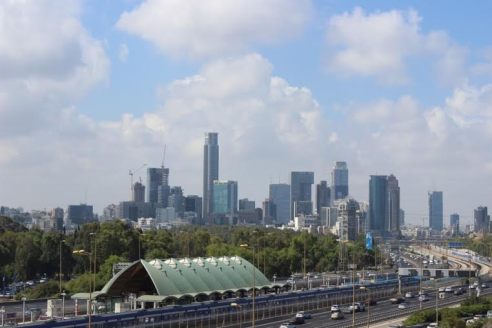 View of Downtown Tel Aviv from the University

There were, however, a couple of reminders of the conflict. For instance, the buildings in TAU are sprinkled with bomb shelters. 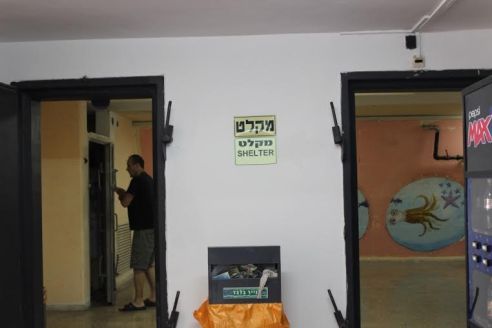 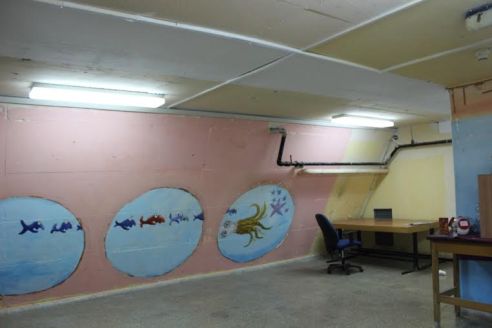 Inside a Bomb Shelter

Then, while walking to the bus stop for our first outing, Lin and I suddenly came across a police van that was blocking the road. Someone had left an unidentified package in the bus stop and a bomb squad was inspecting it. 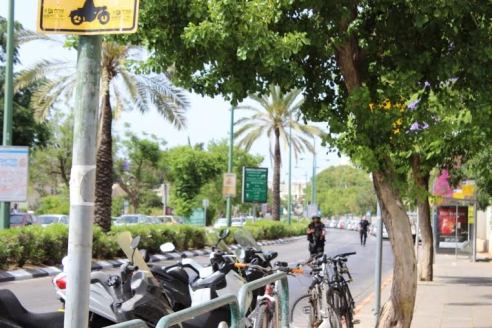 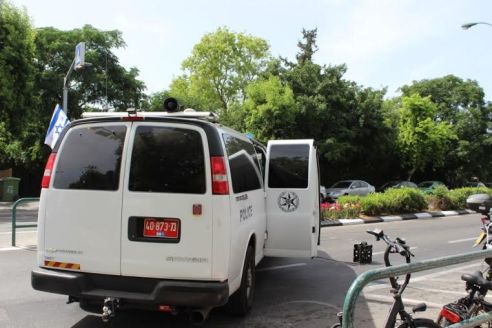 In a few minutes the way was cleared and we boarded Bus No. 25 on our way to the ancient port city of Jaffa.

Bio:
Mary Ann Chacko is a doctoral candidate in the Department of Curriculum and Teaching at Teachers College, Columbia University. She is an Editor at Cafe Dissensus. Read more of her work on her blog, Chintavishta. Twitter: @chintavishta

Read the latest issue of Cafe Dissensus Magazine on ‘In the Shadow of the Larger Faiths: The Minor Faiths of South Asia’, edited by Prof. Sipra Mukherjee, West Bengal State University, Kolkata, India.