7.30 PM: Having been lowered to consume less kerosene, the lantern wicker emits a low, slightly reddish glow to combat enveloping darkness. The oxen herded to call it a day; cows having chewed last of the cuds; buffaloes mercilessly buffeted by those carnivorous mosquitoes; spiders having given up on the idea of liberating themselves from tangled webs. Farmers high on the drags of grass and we, students of Bharat, done with the pearls of wisdom for the day. It was on this note of languid resignation and imminent retirement that a flat voice would crackle out of the rundown transistor: Yeh Aakashvani ka Patna kendra hai. Ab aap Anant Kumar se samachar suniye (This is All India Radio Patna Centre. Listen to the news from Anant Kumar).

The word ‘Aakashvani’ always had a divine connotation for us. When Devvrata took the oath of perennial celibacy to defend Hastinapur – come what may – all the Gods and Goddesses, yakshas, yakshinis, and so on spoke in one voice: Devvrata, aaj se tum Bhishma kahlaoge (Devvrata, you will be called Bhishma today onward). So this was Aakashvani for us. The initial expectation was that of a cosmic miracle. When the sun, the moon, and the earth would be in a straight line, a voice would appear from nowhere. But it would be heard everywhere: the Maker was fond of this land and regardless of our wickedness, He would not let it destroy itself.

But Anant Kumar, the Radio newsreader, spiking our sense of expectation and imagination, would have some other ideas.

What survives in memory is the utter flatness of his voice. Come hell or high water – and both were not very uncommon in the state I grew up in – he would read out from the news without an iota of emotion or additional energy. It was not news or views. It was communique. This flatness of voice only heightened and accentuated the creeping sense of helplessness and haplessness, so characteristic of the countryside of Bihar.

The rationale of the regional news was to make it loud and clear that the state was in control, despite the fact that a furious nature and a vengefully frustrated opposition had ganged up in complicity against the incumbent government. The sense was that the state was leaving no stone or brick or mountain unturned to protect the citizens from anarchy and chaos.

But if the iron-fist of the government was there, could benevolence have been far behind? He would reel out figures and data – all in eight or nine figures with last two digits after a decimal – to impart accuracy to statistical development of Bihar. Life-hardened and fundamentally cynical farmers knew the true worth of these data. One of them sitting around the crackling transistor would either fart dismissively or would start scratching his balls violently.

On close scrutiny, it was possible to detect some variations in his apparently flat voice. He would start on a confident note but somewhere down the script, his own sense of disbelief would kick in. This gap between his professional requirement and personal commitment would account for his voice cracking and the transistor crackling.

But with these variations, he would meander through riots, calamities, droughts, famines, catastrophes and against them the resoluteness of the government to not only fight them back but also promise new paradises and new utopias. 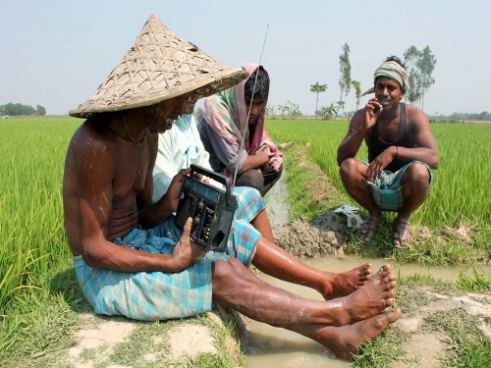 And there were stock phrases which all of us remember to this day. These phrases ranged from the water level of the major rivers including Adhwara Samuh ki nadiyaan, going up to concern having been expressed (chinta jatayi hai), to Bihar Ke Badhte kadam, and so on. All these phrases conveyed the same message: as long as the government was in power, it would not stop caring for people. All it meant was that people deserve the news they get because if they can’t make news, news would be made out of them.

It was the final reminder of the power, prejudices, and predilections of the socialist state, its benign generosity, its unshakeable resolve, hackneyed commitment to usher in a socialist, secular, sovereign, democratic Republic.

Postscript: after the news, transistors – assembled at Chandani Chowk and embossed with ‘Santosh Brand’ – would start throwing tantrums. A star in the star-spangled Sky would press its left eye and another star nearby would click its tongue to express sorrow at our predicament. Daadi – fresh from her primary sleep – would babble something incomprehensible. Exhaustion and exasperation would dissolve our resolve to stay awake. We would succumb to the abyss of the night – sometimes Anant Kumar would haunt us in nightmares, too.

Bio:
Sanjay Kumar attended Delhi University to pursue graduation and post-graduation. He is heavily invested in movies, history, literature, and popular culture. He is based in Patna, Bihar, India.